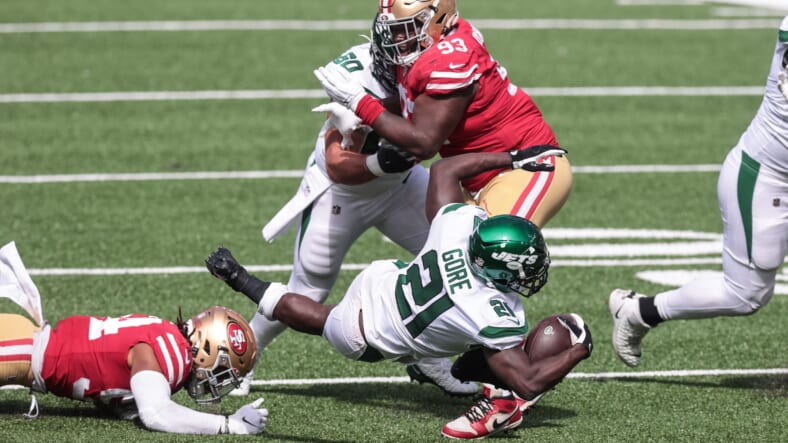 The New York Jets’ ugly loss to the defending Super Bowl finalists on Sunday was perfectly defined in four plays.

This time, even the scoreboard couldn’t mask just how ugly the start of the decade has been to New York Jets football.

The San Francisco 49ers opened the Jets’ MetLife Stadium slate with an 80-yard touchdown run from Raheem Mostert, foreshadowing the carnage to come in what became an 31-13 victory on Sunday afternoon. San Francisco rushers tallied 182 yards overall, while the Jets countered with only 277 yards, 17 first downs, and Sam Ficken field goals.

Following a 27-17 loss on opening weekend in Buffalo, one whose final score hid just how one-sided the affair truly was, the Jets (0-2) fell behind right from the literal get-go, falling to a San Francisco team that lost Jimmy Garoppolo, Nick Bosa, and Raheem Mostert to injury throughout the course of the game.

ESM recalls the four plays, one from each quarter, that played the biggest factor in the Jets’ fate…

On the first play of the game…

If one was writing a script in San Francisco’s favor about Sunday’s game, one could say a touchdown from the first play from scrimmage would be too on-the-nose for horror-seeking Jets fans. Alas, terror beyond imagination came to wild, screaming life upon San Franciso’s takeover.

Before his medical departure, Mostert ripped off an 80-yard score before many watching from home took their seats. It put the Jets in a major hole early on, one the team never escaped. Most major upsets are energized by the underdog keeping pace with the favorite and forcing them into an early deficit. The Jets did the exact opposite against the defending NFC champions.

The middle stages of the second quarter was somewhat fueled by green hope. New York narrowed the score to 7-3 and even Jordan Reed’s first touchdown, one that expanded it to 11 didn’t seem like a dagger at the time. After San Francisco established a two-possession lead, the Jets embarked on a methodic 11-play, 55-yard drive. It began with a 13-yard run from Frank Gore, good for one of four first downs the Jets would earn on the drive. Things stalled, however, with a one-yard fourth down at the cusp of the San Francisco red zone.

Gase should be praised for his gutsiness by going for it. A field goal, let’s face it, was going to do the Jets no good. It’s great to see Ficken converting his opportunities, but infiltrating Niner territory by that margin was no guarantee. Any opportunity, especially one as manageable as a one-yard fourth down, should be capitalized on.

But the single-back option with Josh Adams in to was highly ill-advised. Not only has Gore proven himself reliable in short-yardage situations in his advanced age, but the single-back formation with no wall in front of Adams proved costly. The days of Richie Anderson and Tony Richardson are long gone, but the Jets effectively used tight end Trevon Wesco in a role similar to a fullback at several points last season. Providing no protection to Adams allowed an immediate San Francisco invasion that more or less shifted momentum permanently.

The 49ers immediately capitalized on the error. In what became Jimmy Garoppolo’s final drive of the game, they went 80 yards in 13 plays to score on Reed’s second touchdown just before the halftime gun.

3rd Quarter: What the Fick?

A dishonroable mention should be dispensed to the Jets’ defense allowing a 3rd and 31 to end in a first down through a 55-yard run from Jerick McKinnon, one that yielded a Robbie Gould field goal. Alas, the ensuing offensive possession perhaps provided an early look at the Jets’ 2020 mindset…one of quitting.

The failed fourth down attempt in the latter stages of the second quarter perhaps ruined the Jets’ Sunday psyche from there on out. With San Francisco’s offense mire in incostincy under the watch of backup Nick Mullens, a glimmer of hope emerged for the Jets when they made another red zone trip in the middle stages of the third quarter, down 24-3. The opportunity was arranged by Pierre Desir’s first interception in green.

If a field goal was meaningless in the second quarter, it was downright unspeakable in the third quarter. Even a short conversion from Ficken would make only a cosmetic difference at most. As Bob Dylan once famously wrote, when you’ve got nothing you’ve got nothing to lose. Alas, an 18-point lead can’t be erased in two possessions…the Jets, after all, don’t compete in the XFL (which allowed for nine-point possessions).

Yet, the gutsiness Gase displayed in the first half had completely evaporated by the second. The choice to kick a field goal in a 24-3, third quarter setting was indicative of a team that had completely quit on a Sunday opportunity. Things were probably beyond saving, but to see the Jets flat out admit hopelessness was troubling.

We know things aren't going well, but this was a pretty great play by Sam.

Last week Adams earned himself an opportunity through a garbage time score. This time, Braxton Berrios made the most of an opportunity as the recipient of a great play from Sam Darnold. The quarterback partially made up for an otherwise brutal day by escaping the relentless San Francisco rush, find Berrios on the run to complete the 30-yard score. It’s a play that will likely ultimately be forgotten in the long run, but Darnold was at least able to provide a single highlight, one that could to an expanded role if Breshad Perriman’s injury winds up being long-term.

The Jets return to action next Sunday afternoon against the Indianapolis Colts (4:05 p.m. ET, CBS)