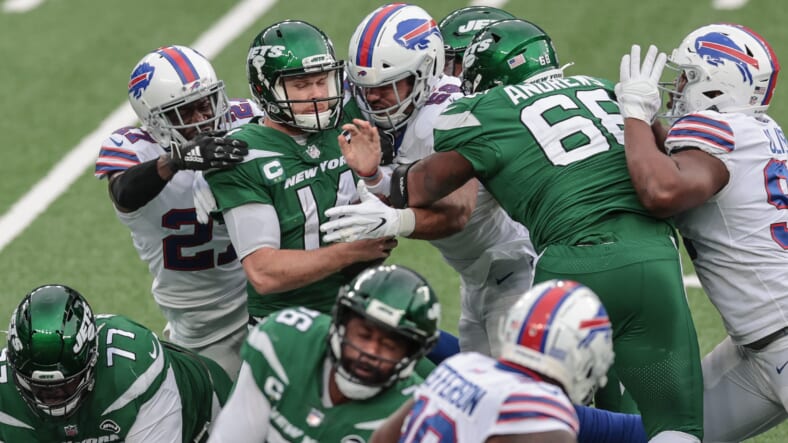 The New York Jets actually held a brief two-possession lead on the Buffalo Bills, but the normalcy of defeat followed soon after.

Usually, three-pointers haunt New York’s trio of professional basketball franchises. This time around, however, one of their football teams ended up on the wrong side of a showcase of triples, namely six from Tyler Bass.

The Buffalo Bills’ rookie kicker converted 6-of-8 field goal attempts on Sunday afternoon, leading a comeback effort over the winless Jets. It negated what was probably the Jets’ most consistent half of the season from an offensive standpoint. They tallied 186 yards and 10 points over the first 30 minutes but only four yards in total over the latter half. Buffalo prevailed by an 18-10 final. Sam Darnold threw for 120 yards and had two passes intercepted in his return from injury, while La’Mical Perine scored his first career NFL touchdown.

ESM looks back on the Jets’ latest loss, grabbing a play from each Sunday quarter that, for better or worse, that shaped their past, present, and future of their team…

At first glance, it’s hard to truly hate what the Jets (0-7) were able to accomplish on their opening drive. They were able to enjoy a 29-yard field from former CFL and XFL participant Sergio Castillo to give them a rare early lead. But it could’ve been so much more from a New York standpoint.

In his first drive back from the injury-induced absence, Darnold led a swift, methodical drive, situating the Jets at the Buffalo 17. However, the Bills’ defense gave him a cruel welcome back in the form of a shared sack between A.J. Epenesa and Trent Murphy. The seven-yard loss more or less killed New York momentum before it could truly return, a pair of short passes failed to erase the damage and a Buffalo penalty couldn’t even help matters at a five-yard charge. Not only did it forced the Jets to end a relatively successful drive with a mere Castillo triple, but it was a foreboding warning of things to come. Darnold would go on to be sacked six times over the course of the afternoon.

The Jets’ propensity for going for it on fourth down should be somewhat commended. Knowing there’s little, if anything, to lose in this woebegone campaign, New York has taken Bob Dylan’s axiom of “when you ain’t got nothing, you’ve got nothing to lose” to heart. The Jets went for it on fourth down 10 times entering Sunday, the fourth-most in the league.

Converting them, however, has been the real challenge.

The Jets converted only two tries in their prior decalogue of attempts, and that number didn’t improve on Sunday. Playcalling has been the main reason behind the lack of success, in yet another recurring problem. Playcalling affairs were turned over to offensive coordinator Dowell Loggains for the Buffalo matter, but his shotgun draw to Perine on fourth-and-one…putting the Jets’ first-down plans in jeopardy before they could ever truly begin…left a lot to be desired. Jerry Hughes and Quinton Jefferson invaded the backfield to stop Perine in his tracks, stifling the Jets’ attempt at points. A field goal was going to do the Jets no good with a 3-0 lead…but neither would a shotgun draw.

THat play wound up permanently shifting the game’s momentum. The Jets earned 103 yards over their first two possessions…they gained 87 for the rest of the game.

3rd Quarter: Can You Diggs It?

Defensively, the Jets actually did a decent job in holding Stefon Diggs in check, keeping him at 48 yards on six catches. But he still managed to change the course of the game in the early stages of the third quarter.

Facing third-and-five at the Bills’ 32, the Jets defense had a major opportunity to swipe momentum away. Alas, they couldn’t stop Diggs to the right, as the veteran receiver picked up a crucial 12-yard-gain that kept the Bills’ drive alive. It would lead to a 46-yard field goal from Bass, a triple that narrowed the Jets’ lead to 10-9. Who knows how much things would’ve changed with this simple stop, but it’s safe to say that that play affected the Jets’ mindset for the remainder of the affair.

For all their shortcomings, the Jets still had an opportunity to push things to overtime, the score at a manageable 18-10 tally thanks to Bass field goals and a strong defensive effort that kept the BIlls out of the end zone. Alas, it wasn’t enough to push the Jets forward for a new opportunity to nab their first win of the season.

Pressure from Buffalo was raised to 11 on the final attempt, swarming Darnold on the first play of the final drive. They picked up 15 yards on a brutal hit on Breshad Perriman by Michah Hyde, but the Bills continued to be relentless, forcing George Fant into a holding penalty just to keep things relatively sane. It was Hughes that wound up rising to the highest of occasions, not only sacking a reeling Darnold but then picking up an interception through the quarterback’s desperation and sealing the Jets’ fate.

Particularly troubling in this game was the return of Mekhi Becton. The rookie had a decent day blocking, but had two penalties, including one that wiped out a 14-yard third-down conversion from Chris Herndon. Becton had one penalty through the first three games of his career.