For the New York Jets, the key to victory in Week 11 is straightforward 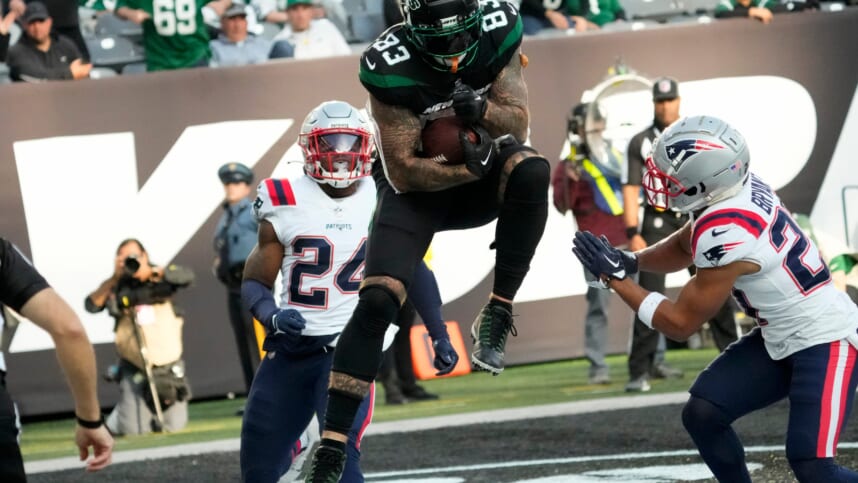 Jets tight end Tyler Conklin (83) leaps for his second touchdown of the game. Unfortunately, for the Jets it wasn't enough, losing to the Patriots, 22-17. Sunday, October 30, 2022 Jets Host Patriots

Some would say this upcoming Sunday’s game for the New York Jets is equivalent to a playoff game. And there is good reason for that.

The Jets, at the moment, have fairly strong chances of making the playoffs (72.2% per ESPN Analytics). The team sits at 6-3, and with a win this weekend, they take control of first place in the AFC East.

However, with a loss, for the time being, the Jets could find themselves in last place if the Buffalo Bills win. That is just how competitive the division is.

Even more significantly, the Jets drop both matchups with the New England Patriots for the year, crushing their tiebreak with them if that’s what it happens to come down to at the end of the year. A win, though, provides the Jets needed breathing room with a 1-1 split and full two-game lead against the Patriots.

The New York Jets’ key to winning is fairly simple:

Winning this game on the road in New England is undeniably significant for the Jets. The path to ultimately taking a victory is self-explanatory for the Jets.

The good thing is in Wilson’s six starts, the Jets have a total of six turnovers, and five of those six came in two games. From Weeks 5-7 with Wilson, the Jets did not commit a turnover. They have proven that they can play mistake-free football.

On the other side of the ball, the Jets’ defense has tallied up 11 turnovers in the six games Wilson has played, nearly two per game. The unit has also had at least one turnover in every game this year.

In six games this year, Mac Jones has seven interceptions, along with a lost fumble. The Jets’ premier defense should be able to get one or two takeaways in this one.

In the two full games Wilson has played against Bill Belichick, he has thrown seven interceptions. For the Jets to completely change that narrative, they must run the football with Michael Carter and James Robinson, committing to it for four quarters.

From there, continued success from the Bills’ win from Mike LaFleur in terms of having Wilson quickly get the ball out will be crucial. Wilson has been at his best by far when he has thrown the football in less than 2.5 seconds.

If the Jets play on schedule from a down-and-distance standpoint, it will allow Wilson to ease in. Plain and simple, minimizing mistakes will lead the Jets to their seventh victory in 2022.

Lastly, along with the turnovers, the Jets must do better in comparison to their last game with the Patriots when it comes to penalties, third down, time of possession, and special teams. In essence, keeping it simple with all of the key team points will dictate how things go for the more talented football team, the Jets, in the end.