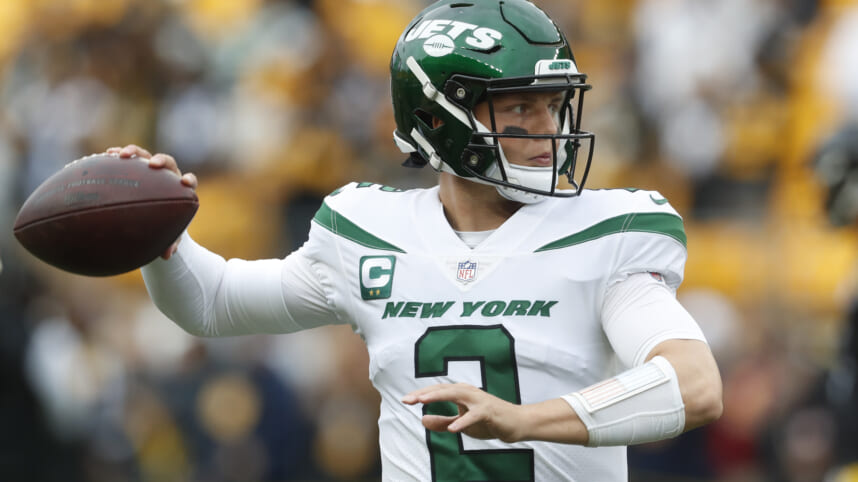 The New York Jets are set for a road test against the Pittsburgh Steelers tomorrow. Both teams enter at 1-2 with a lot at stake.

In the two losses the Jets have had, they have beaten themselves. On third down on both sides of the football, the Jets have to execute better. The turnover and penalty battles will make an impact on the Jets’ chances. Lastly, getting the running game established to win the time of possession battle and finishing drives with touchdowns instead of field goals this week will be key.

Pretty self-explanatory. The biggest unknown for the Jets entering Week 4 is their left tackle position.

Finally, commit to and establish a dominant run game:

With left tackle issues and Zach Wilson starting his first game of 2022, it is the perfect time for the Jets’ ground attack to finally dominate.

Combined, Breece Hall and Michael Carter have yet to have 20 carries in one game. That needs to change for the Jets to win this one and get to 2-2.

The Steelers’ run defense has allowed 295 yards over their last two games. Hall and Carter combined should have 25-30 rushing attempts in this game. If so, the Jets will give themselves a strong chance of winning.

Without T.J. Watt, it will be important for the Jets to key in on the Steelers’ other star along their defensive front, Cameron Heyward.

Heyward has seen some double-teams come his way without Watt over the last two games. The Jets should have the same approach going into this one.

Heyward is one of the few Steelers who can take over this game. Chipping at left tackle and doubling Heyward gives the Jets offensive line a chance to be a successful operation in this one.

This is a tough week for the Jets’ defensive line to heat up. The offensive line of the Steelers has played well across the board.

That being said, the Jets’ defensive front cannot be outright dominated. In run defense, the box should be stacked to help slow down Najee Harris.

The pass rush of the Jets may struggle yet again, competing against the Steelers front offensively. In pass defense, though, the key will be setting hard edges and keeping contain to not allow Mitch Trubisky to get comfortable on the move outside of the pocket.

The fifth and final key to victory. Obviously, Zach Wilson is set to make his first start of his second year. Rust is fair to expect. Still, it will be on the Jets to scheme up some relatively easy and quick completions for Wilson early on in this ballgame to ease him in.

Relying on star wide receivers Elijah Moore and Garrett Wilson will only help Wilson. Utilizing Hall and Carter in the passing game underneath as well as on screens would assist the young signal-caller.

Lastly, with unknowns in terms of left tackle execution, it will be key for Mike LaFleur to start moving the pocket now having a mobile quarterback. Utilizing play-action rollouts and boots to move the pocket and change the launch point, something the Jets have not been able to do should be a primary focus to win this game.