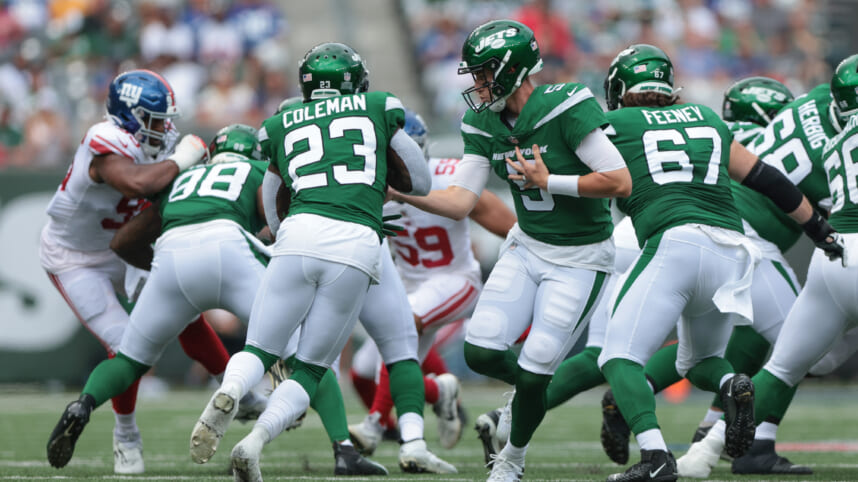 Training camp and preseason action are completed for the 2022 New York Jets. We are roughly 24 hours away from this roster being cut down from 80 to 53 players. From there, general manager Joe Douglas will have 16 practice squad spots to fill.

With improved depth in comparison to years past, tough decisions loom for Douglas, Robert Saleh, and company. Following yesterday’s final preseason game, we got one last idea of where things could possibly stand with the organization with roster bubble players. Let’s take a look at this last 53-man roster projection for the 2022 Jets.

Certainly a tough decision with preseason star, Chris Streveler. Ultimately, it is hard to say where he stands with the top decision-makers in what is a crowded quarterback room. Either way, Streveler came in and did a phenomenal job. If the Jets release him and he somehow does make it through waivers, he should absolutely be a top practice squad priority. Mike White certainly helped himself with yesterday’s performance.

Rookie undrafted free agent Zonovan Knight should be important for the Jets to try and retain on the practice squad. The run blocking yesterday certainly did not help Ty Johnson or La’Mical Perine, who were trying to prove themselves one last time. In the end, this backfield will nearly almost always feature Breece Hall and Michael Carter, limiting reps. It makes it tough to warrant retaining a fourth running back. Tevin Coleman showed he still has his speed yesterday and helps with his experience for Hall and Carter.

Following Coach Saleh’s comments yesterday and the potential Denzel Mims reminded everyone he has, he makes the cut in this final projection. Undrafted rookie Calvin Jackson is likely a viable practice squad option for the Jets. From top to bottom, this is an exciting group of wide receivers for the Jets to feel great about.

After years of having hardly a quality tight end, the Jets have to let at least two young players go here and, in this case a third. Trevon Wesco’s time with the Jets seems to have run its course. One of the harder releases throughout this projection is Lawrence Cager. Cager showed out well in the first two preseason games. Unfortunately, limited spots hurt his chances here. He or Kenny Yeboah could be practice squad candidates.

As a result of Conor McDermott’s injury leading to a few weeks of missed time now, it seems Chuma Edoga has the third tackle spot secured. It is ideal for the development of Max Mitchell to have a veteran swing tackle in front of him early on. This starting five has talent across the board and potential. They just need to get up to speed collectively before the Ravens game.

A few tough calls to make here with Vinny Curry, Bradlee Anae, and Jabari Zuniga. The Jets could poach one on the practice squad if they clear waivers. Despite the potential trade buzz surrounding Bryce Huff, he showed yesterday why he belongs on this roster as a young, talented pass rusher with speed. This group has loads of upside.

The two tackles let go of here are Nathan Shepherd and Tanzel Smart. While Shepherd may be more proven and experienced than Jonathan Marshall, his role would still likely be limited. Marshall also has tons of athletic traits that are worth sticking with to further develop.

The lone 2021 draft pick to not make the final cut is Hamsah Nasirildeen. Perhaps, the Jets retain him on the practice squad. Ultimately, the value Del’Shawn Phillips provides on special teams for Brant Boyer makes him more valuable in what is defensively the fifth linebacker spot.

No changes to this group. It is significantly improved with the first two prime additions. From there, the depth is more than reliable. Core special-teamer Justin Hardee will maintain his integral role for Boyer’s unit. Isaiah Dunn or Rachad Wildgoose could finish with the team on the practice squad.

This group remains fairly straightforward. Will Parks yet again helped himself in yesterday’s game. Third-round pick in 2020, Ashtyn Davis did not make any impactful plays to help his stock over Parks. He was in the final preseason game with the third team until the very end. Undrafted free agent Tony Adams may land on the practice squad.

Greg Zuerlein did very well yesterday, going 4-for-4 on extra points and 1-for-1 with a 49-yard field goal. The Jets will need Braden Mann to provide consistency in what is a fairly pivotal year for him.