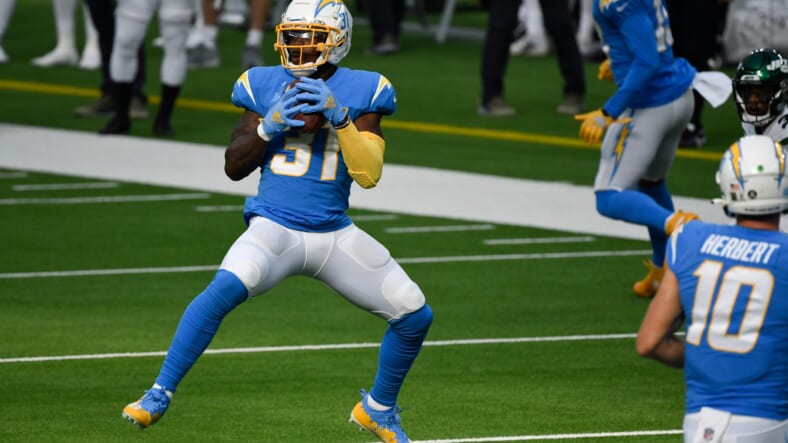 Ballage spent three quiet games with the New York Jets, but rose to the occasion as a member of the Chargers.

Kalen Ballage is one of several players that have been on and off the 2020 New York Jets’ roster as the team tries to find the perfect formula for breaking a long streak of futility. Unlike some of his compatriots, like Avery Williamson or Steve McLendon, Ballage more than likely won’t get a tribute on the MetLife Stadium videoboards if/when he returns as an opponent.

Nonetheless, Ballage, currently a Los Angeles Chargers running back, is part of the Jets’ star-crossed history, having spent three games with the team earlier this season. He met up with his former teammates on Sunday at SoFi Stadium, earning 71 total yards in the Chargers’ 34-28 victory over the Jets. It followed up a 102-yard output earned in last week’s tilt against another former team, the Miami Dolphins. The rusher has earned at least 70 total yards in each of his three contests in a Charger uniform.

Ballage previously earned 81 total yards over a trio of losses, including 44 receiving tallies on five receptions in the team’s Week 3 loss in Indianapolis. Even in his brief time with the organization, his tenure managed to attract typical New York silliness. The Jets originally tried to bring in Ballage, then in Miami, through a trade in the late stages of training camp, but the trade was nullified when the rusher failed a physical. He wound up joining the green New York crew anyway when the Dolphins waived him with an injury settlement just over a week after the trade talks fell apart.

Going after Ballage seemed to be a heavenly football endeavor for all sides. Jets head coach Adam Gase helped the back begin his professional career through his prior top boss endeavors with the Dolphins. Miami originally chose Ballage in the fourth round of the 2018 draft after a strong career at Arizona State (he tied a Football Bowl Subdivision record with eight touchdowns in a single game during a 2016 win over Texas Tech). Despite the familiarity with Gase’s offense, Ballage failed to find a consistent role in the Jets’ rushing rotation, even with Le’Veon Bell injured and later outright released. Ballage himself would be released by the Jets on October 5.

Despite things not working out in New York, Ballage didn’t seem to have any ill will toward Gase and whoever’s left in green. In a report from Jeff Miller of the Los Angeles Times, Ballage used the word “love” to describe his relationship with Gase.

â€œItâ€™s been crazy,â€ Ballage said, per Miller. â€œItâ€™s been hectic. But, obviously, itâ€™s a blessing for me to be here with the Chargers. Things worked out the way they worked out and Iâ€™m kind of glad, to be honest with you.â€

The Chargers signed Ballage to their practice squad four days after his Jets release and promoted him earlier this month. Injuries in Los Angeles’ rushing corps (Austin Ekeler, Justin Jackson, Troymaine Pope) have forced him to take on a larger role in an offense building around first-round rookie and newly minted franchise quarterback Justin Herbert. The veteran Ballage has used his size of 231 lbs. to create a bit of a security blanket for Herbert in short-yardage situations. Both long and short exploits were on display from the former Sun Devil. For example, he helped the Chargers’ offense open the second half with three first down carries on their opening drive.

Ballage has high hopes for his former Pac-12 Conference opponent, with Herbert having competed for the Oregon Ducks.

Chargers head coach Anthony Lynn had some special words for Ballage in the pregame buildup.

Ballage is expected to maintain the top rushing option for the Chargers (3-7) until Ekeler and Jackson make their returns. Los Angeles next battles the Buffalo Bills next Sunday afternoon, while the Jets take on the Dolphins at the same time (1 p.m. ET, CBS).