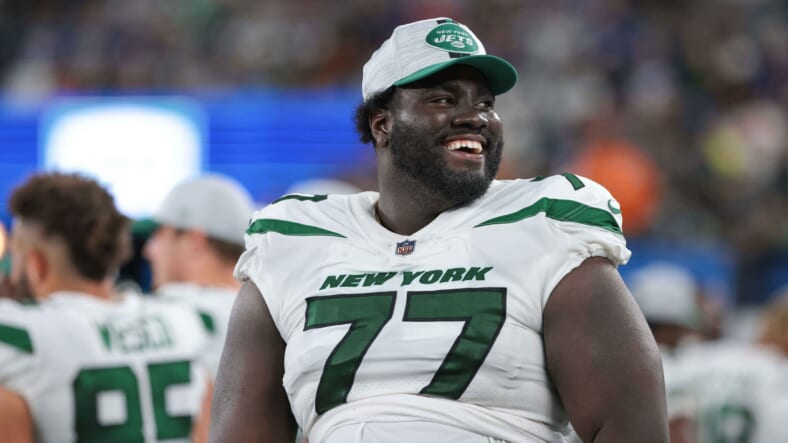 New York Jets first-round pick Mekhi Becton spoke to ESM about the weeks to come and his new endorsement endeavors with Pepsi.

As the anchor of the New York Jets’ offensive line, left tackle Mekhi Becton already has some arduous tasks ahead of him on autumn weekends.

Thanks to a collaboration with Pepsi, however, Becton will not only be able to protect the stars of Gang Green’s revamped offense, but he’ll also have the time and ability to assist Jets fans in preparing their gameday snacks.

Days before the Jets open their 2021 season on Sunday against the Carolina Panthers (1 p.m. ET, CBS), Becton was revealed as the face of Pepsi’s new Jets-centered campaigns, entitled “Made for Jets Watching“. His participation is headlined by an augmented reality endeavor in which a mini version of the Jets’ first-round pick from the 2020 draft assists fans in conjuring up some Sunday recipes, including Pepsi BBQ Sauce, a dressing made with the official soft drink of the NFL.

â€œAs fans across the country return to their favorite gameday watching and game day eating traditions this year, weâ€™ve teamed up with the Jets to help fans unapologetically enjoy the experience all season long,â€ Kathy Kennedy, Sr. Director of Marketing, PepsiCo Beverages North America, North Division said in a company statement obtained by ESM. “Pepsi wants to give fans the magic of gearing up for game day no matter where or with whom they find themselves watching this season.”

“Everything drew me to (this campaign),” Becton told ESM. “My parents they’re really big Pepsi fans and stuff like that. So I always grew up with it, with them drinking it and things like that. So it was just, it’s just a dream come true, honestly.”

With the season opener looming, Becton spoke with ESM about his new partnership and the upcoming trials and the Jets will face in the 2021 season…

Q: While this is an interesting and hopeful period on the Jets’ timeline, many choose to dismiss such hope as being a case of “Same Old Jets”. How is this team different from prior incarnations we’ve seen on this rebuild?

(Robert Saleh) been really great. He brings the energy every day, he makes sure we’re bringing the energy every day. He’s just he’s a great guy, a great coach as well. He never sugarcoats things. He’ll always tell it how it is, so that’s already great to have.

Q: The team addressed its offensive needs in the first round through the selections of Zach Wilson and Alijah Vera-Tucker. What has it been like to work with them and almost guide them through the early stages of their NFL journeys?Â

As for (Wilson), he has been great, he’s a great player. He’s going to do a lot of things that a lot of people aren’t expecting him to do and I can’t wait for him to prove the world room. The fact that he was named a captain speaks a whole lot of volume about how he just he’s just a leader already. So it has just been really great, and I can’t wait for fans to see it.

Q: In addition to the rookies, the team added several veteran talents that know to win and contribute. How they helped this team and what impact have the defensive additions left on you, namely DE Carl Lawson?

A: It’s was great to have them here. Guys like Corey (Davis), Sheldon Rankins, C.J. Mosley, they can take control of the team when things are getting out of whack. They are always people that everyone always listens to no matter what they’re saying. It’s been really great and it’s very helpful as well, too.

Carl helped improved me a lot, just helping with my hands, and my feet, just making sure I don’t give up on a play because he’s still going 100 percent. So that definitely personally helped me out a lot.

Q: What stood out to you most about the New York culture when the Jets chose you last season? Was there any additional pressure considering they passed on several elite receiving talents to bring you in?

Q: What’s the message you want to send out as a leader and representative of the new-look Jets and how big would it be to make a statement in these early contests against noteworthy opponents (Carolina & New England)?

(Special thanks to Katherine Hartley for making this interview possible)