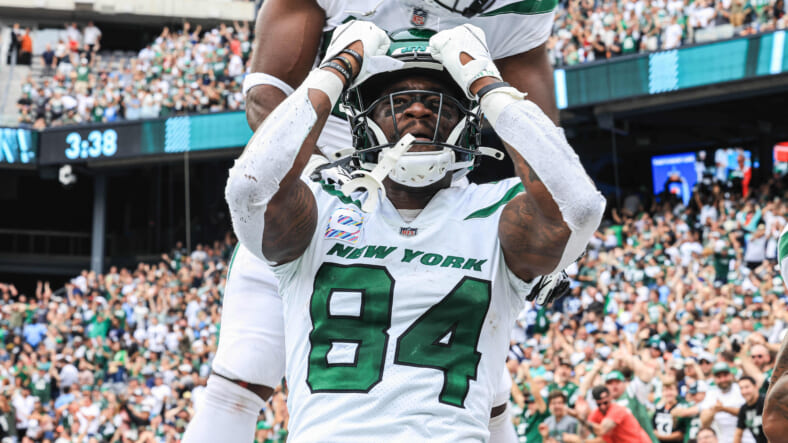 Potentially no player on the New York Jets gets scrutinized more than wide receiver, Corey Davis. In most cases, it comes as a result of what was a frustrating first year with the team in 2021, headlined by some drops and an injury after signing a big contract.

However, it is a new year, and the wide receiver has, without a doubt, been a rock for this football team through the first quarter of 2022.

All that WR Corey Davis provides the New York Jets:

The six-year, 27-year-old veteran provides the Jets with a savvy, experienced presence to a young team. Also, a tough, gritty mindset not just in the passing game but the running game as well.

Davis has been nothing short of clutch for the Jets in both wins of this year. In the first win, he caught a big 66-yard touchdown that gave the Jets life and started a two-score, two-minute comeback. This last week, Davis caught all five of his passes in the game in the second half. His final four catches came in the last 10 minutes as he contributed to both touchdown drives. Of those four grabs, the first two came on a fourth and third down.

So far, in his second year with the Jets, Davis had 15 catches for 261 yards (17.4 per catch) and two touchdowns in four games. This puts him on a remarkable pace of 63 catches, 1,109 yards, and eight touchdowns over 17 games. In three games to this point, Davis has had at least 74 yards receiving.

Davis’ role in the passing game is fairly self-explanatory. To start, he offers the veteran presence to go along with the youth the Jets have with Elijah Moore in his second year and rookie Garrett Wilson. Davis has always had a clear connection with Zach Wilson since they both joined the Jets in 2021. What Davis also offers is size, a bigger possession receiver for this group. He is utilized on the intermediate level over the middle and routinely makes tough catches. Davis is also an established and reliable route runner.

In the running game, Davis uses his physicality to his advantage and plays with great effort as a blocker, something he has a well-known reputation for. The Jets put him in positions to make an impact as a run blocker. His willingness without the ball in his hands speaks to his selfless attitude for the team.

Overall, Davis is a winning football player and an asset to the Jets. He will continue to be an integral contributor to this offense. Whether it be running the tough routes over the middle in traffic or giving maximum effort in the running game, Davis is key for the Jets’ offense to be efficient.