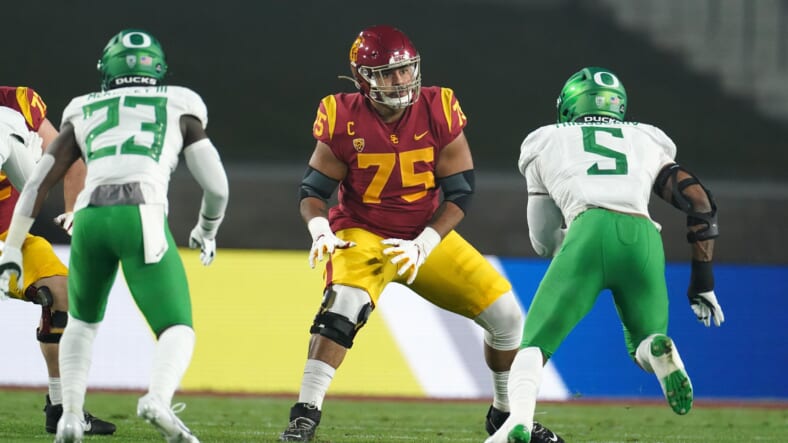 This is not the same old New York Jets. After hinting towards a trade, the Jets have made a move up nine selections to grab a monster from USC. After nabbing their guy at Quarterback, the Jets have grabbed Alijah Vera Tucker. Tucker is a versatile guard from Oakland, now he heads to the Big Apple.

Tucker was a highly touted prospect out of high school, receiving offers from a majority of PAC-12 schools. Tucker immediately excelled at USC and only allowed five sacks in 927 snaps. Tucker, at 6 foot 4, 315 pounds, has the size to carry that excellence over to the next level. Tucker is a plug-and-play guard with the All-Pro potential as run and pass blocker.

With Tucker likely slotting in at left guard, the Jets now have their left side of the line-locked down for the foreseeable future. Pairing Becton and Tucker up ensure Wilsonâ€™s blindside will be well protected, which is something that Sam Darnold did not have in his time with gang green. A nice little wrinkle as well, Tucker was a captain for the Trojans, something Douglas has made a point for picking players to this point.

The Jets did have to trade up to nab Tucker, but the cost was not too bad. The Jets moved up nine slots while giving their 23rd selection to Minnesota. They also gave the Vikings both pick 66 and 86. In return, aside from pick 14, they also got pick 143 in the 4th round. While they lost both their third-rounders, with three picks in the 4th, donâ€™t be surprised if Douglas moves back into the 3rd if a guy he covets is there. Now, the Jets look to pick 34 to get their pick of the guys who slip out of the first round, with a prime chance to grab another blue-chip prospect.