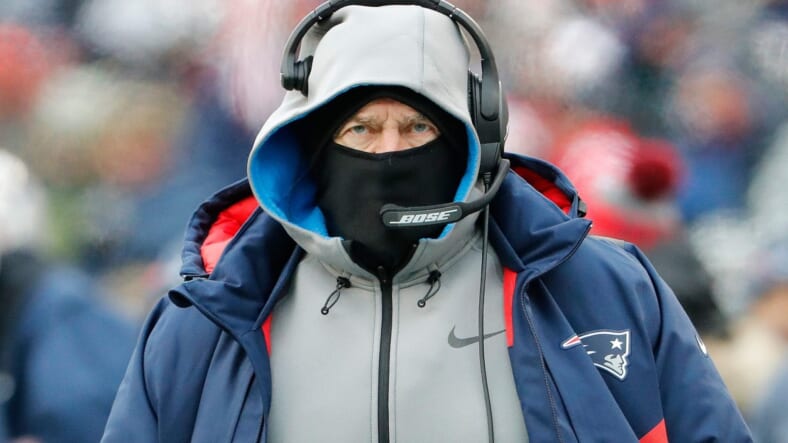 As a meaningless Week 17 showdown awaits, Bill Belichick had some kind words for the New York Jets and their embattled head coach.

As Adam Gase faces an uncertain future, he’s receiving some encouraging words from an esteemed colleague going into the 2020-21 season finale.

The embattled New York Jets head coach received some compliments from Bill Belichick as the two’s doomed squads are scheduled to do battle in a meaningless Week 17 tilt that will end their respective seasons on Sunday (1 p.m. ET, CBS). While the lack of stakes may be a macabre routine for the Jets (2-13), it’s more or less new ground for Belichick’s Patriots. New England (6-9) was eliminated from playoff contention during Week 15 action in Miami and clinched their first losing season in two decades with an embarrassing 38-9 loss to the Buffalo Bills on Monday.

While Belichick is likely only leaving New England through his own volition, things are much murkier for Gase once the final seconds tick off Gillette Stadium’s scoreboard. The Jets have won two games in a row to avoid imperfect infamy but it hasn’t done much to lower the temperature on the second-year boss’ proverbial seat.

But Belichick had some kind words for Gase in Tuesday’s lead-up to the finale, praising him for the job he’s been able to do with numerous departures through injuries and transactions.

“I think Adamâ€™s done a great job this year of continuing to improve the team with coaching,” Belichick said, per Al Iannazzone of Newsday. “As usual, his excellent game plan and play calling are problems for the defense. This is a team thatâ€™s gotten better. How many guys are on some kind of injured list? It must be 20. Itâ€™s a long list. They continue to plug guys in there and play very competitively in all three phases of the game.”

Belichick called out the job Gase and his staff has done with their front seven, as well as the progress they made on offense with two quarterbacks (Sam Darnold and Joe Flacco). To his former point, the Jets had have 17 sacks over their past six games after tallying only 11 in their first nine.

“Theyâ€™ve got a good level of play the second half of the season from a lot of guys, defensively, especially along the front seven,” Belichick said. “Theyâ€™ve been productive offensively, running the ball, throwing the ball with different quarterbacks with Joe and with Sam. Theyâ€™ve both played well.”

“His offense is well designed and well called,” he continued. “Fundamentally, you can see the improvements that they are making steadily through the course of the season. Coach Gase and his staff have done an outstanding job. The players have individually gotten better and collectively theyâ€™ve performed better. Theyâ€™ve done a good job there.”

The Jets’ brutal season, featuring their worst loss tally since the 15 in 1996, could be gain a sense of relief if they finish off with a win over New England. New York has not won at Gillette Stadium since their shocking triumph in the 2012 AFC divisional playoff round and hasn’t beaten the Patriots in regulation in the regular season since 2010. They led a majority of their November meeting at MetLife Stadium but were done in by allowing 13 unanswered points in the final quarter, capped off by a 51-yard field goal from Nick Folk.

Belichick has not announced his starting quarterback for the finale against the Jets. Cam Newton’s continuing struggles, leading to his benching against the Bills, have led some to believe that Jarrett Stidham will be granted his first NFL start as the Patriots continue to search for Tom Brady’s successor. Stidham made his NFL debut in a blowout victory against the Jets last season, infamously throwing an interception that was taken back 61 yards for a touchdown by Jamal Adams.