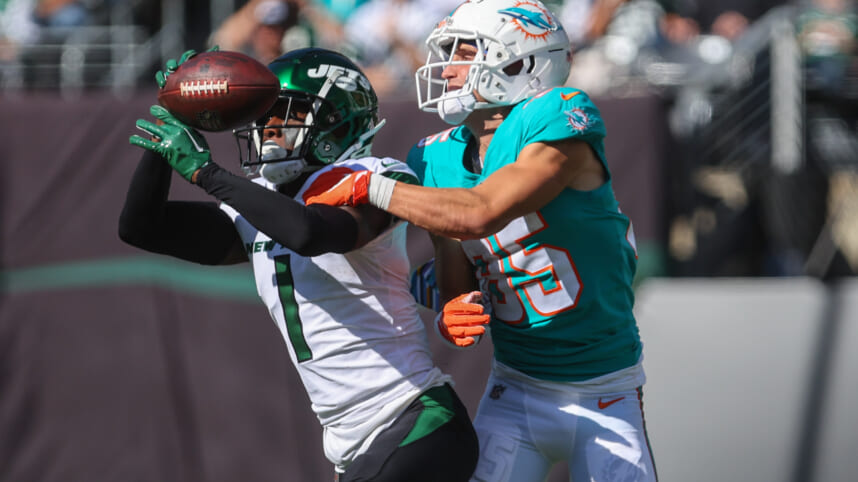 With his immediate success so far, Gardner is gaining attention as one of the best cornerbacks in the NFL in just six games.

Gardner has been matched up against some elite pass-catchers with different skill sets. Whether it be Tyreek Hill, Ja’Marr Chase, Mark Andrews, Jaylen Waddle, Amari Cooper, or Diontae Johnson, Gardner has provided the Jets with exceptional corner play.

Let’s take a look at some of his advanced stats through six weeks.

To start, Gardner has a ridiculous eight passes defended in six games, which ties for the third-most in the NFL. He has had at least one in every game. Gardner is on pace for 22 passes defended in his first year. Gardner has one interception. He also helped set one up for Michael Carter II in Week 4 against the Pittsburgh Steelers that helped set up the game-winning drive.

Gardner has 23 total tackles (16 solo), a tackle for loss, and a quarterback hit, which resulted in a safety.

Taking things a bit further, when lined up in single coverage, Gardner has executed at an elite level.

His passer rating allowed in one-on-one coverage of 19.0 is the best in football. In single coverage, Gardner has been targeted 17 times, allowed just four catches, and forced seven incompletions.

In the Week 6 win at Lambeau Field, Gardner saw six targets come his way, allowing just one catch for eight yards, and forcing three incompletions which led to a 39.6 passer rating allowed. His two pass breakups (attached below) were impressive plays in which he exhibited traits like his recovery speed, quickness, the ability to effortlessly turn hips, along with using his long arms and ball skills to break up a pass.

So far this year, Gardner has the fourth-best catch rate allowed of 43.3%. In 40-man coverage snaps, he has allowed just one catch for six yards, the best in football.

Gardner’s physical and athletic traits have been on display. He has a ton of height at 6-foot-3 and length with 33 1/2″ arms. His wingspan is rare, in the 95th percentile. He plays a tough and physical brand. From there, Gardner has impressive 4.41 speed. Athletically, his ability to flip his hips in transition at his height with his length makes him one unique specimen.

A part of the reason the Jets also drafted Gardner fourth overall was because of his well-respected intangibles. Gardner brought a ton of credibility to Cincinnati’s football program over his three years there after helping them turn their culture around to a winning one.

To this point, Gardner has easily made the Jets organization a much more respectable one, proving just why the Jets drafted him.

At a premium, impact position, the 22-year-old rookie has established himself as one of the premier cornerbacks in the game. Gardner is playing on a Pro Bowl level already and is a key long-term piece to the future of the Jets.