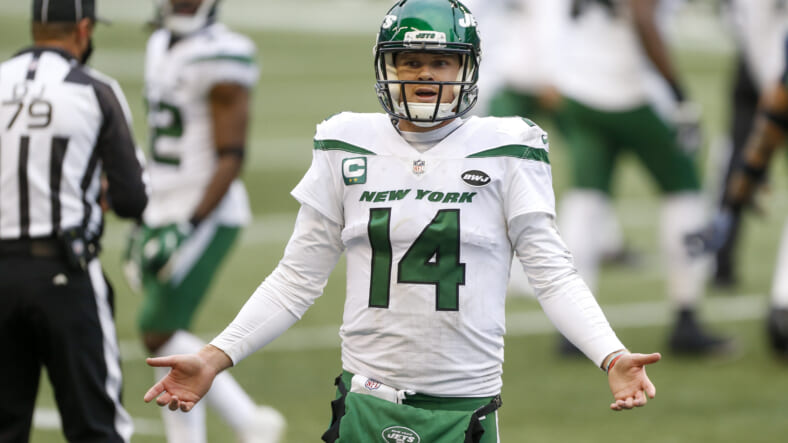 On the cusp of Los Angeles Rams history, Aaron Donald made it clear he’s not taking the New York Jets’ visit lightly.

The holiday season is often meant to be one of glad tidings of comfort and joy. One of the NFL’s most fearsome defenders is fully on board with that concept.

With the holidays come the NFL’s most crucial games, as the calendar inches closer toward the postseason. Aaron Donald’s Los Angeles Rams (9-4) have three such contests remaining. Though their playoff prescience is mostly assured, they’re engaged in a brutal battle for the NFC title with the Seattle Seahawks, a battle that could shift an NFC playoff game from Lumen Field to the Rams’ palatial home of SoFi Stadium.

While the Rams have looked strong at the perfect time, having won three in a row and dismantling the New England Patriots on a national stage last week, they were unable to gain separation from the Seahawks, who crushed the woebegone New York Jets by a 40-3 final last weekend at home. Little more needs to be said about how wayward the Jets’ season has become, but things certainly have a chance to get uglier this weekend. The winless Jets (0-13) will return to the west coast this Sunday to round out their interconference slate in Inglewood (4:05 p.m. ET, Fox).Â

Los Angeles would almost have every right to take the Jets lightly, especially with New York now missing six defensive starters from their opening day lineup after linebacker Jordan Jenkins was placed on injured reserve earlier this week.

But Donald isn’t buying the idea of an easy Los Angeles victory. The interior pursuer of quarterbacks spoke highly of the opponent in his weekly statements and also had friendly words for his Sunday prey.

â€œObviously, theyâ€™re not playing how they want to play, but I think heâ€™s a good quarterback,â€ Donald said of Darnold, Peter Botte of the New York Post. â€œHeâ€™s really mobile. He can move, make things happen with his feet, and get out of trouble. It looks like heâ€™s strong. Iâ€™ve seen a couple times when it looked like he was about to get sacked, but he was able to break out and make something happen. Heâ€™s a solid quarterback, so weâ€™ve been studying that and understanding that plays arenâ€™t going to come easy. Weâ€™ve got to earn them. Weâ€™ve just got to do our job. Heâ€™s a good quarterback. Theyâ€™ve got some good players around him, young players.â€

A Sunday sack of Darnold could set history for the second consecutive weekend. Donald is three sacks away from tying Leonard Little for the most in Rams history (87.5). Darnold was previously the victim of a Jamal Adams sack in Seattle that made his former teammate the NFL’s single-season sack leader amongst defensive backs.

A native of Orange County’s Huntington Beach, Darnold is ready to make his return to Los Angeles, where he entered the national spotlight as the star thrower for the University of Southern California Trojans. He reciprocated Donald’s praise in his own availability.

“Aaron Donald is a good player,â€ Darnold said, per Botte. â€œHe definitely pops out on tape, especially it seems like whenever a play needs to be made, he is always there making it. So it will be fun playing against him.â€

As the Jets seek some form of momentum and any good feeling to take from this lost season. Some members of the team feel like they can take a lesson or two from Donald, one of the premier defenders and scariest backfield invaders in the NFL.

“When you watch this guy get doubl- teamed almost every snap, and the five snaps he gets singled up, he wins,” Gase said of Donald, per team reporter Eric Allen. “I’m sure every D-tackle is trying to get to that point, especially guys that have similar skill sets of length, quickness, strength, things like that, they’re like, ‘Hey, I want to be like that guy.'”

“You look at their front, their front is very disruptive, with their games, especially on third down, so we have to do a good job up there up front and then the back end, they have really good players there too and they do a good of disguising coverages and mixing it up that way,” Darnold said of the Rams defense as a whole, per Max Goodman of SI.com. “We’ve got our work cut out for us, but we are excited for the opportunity.”