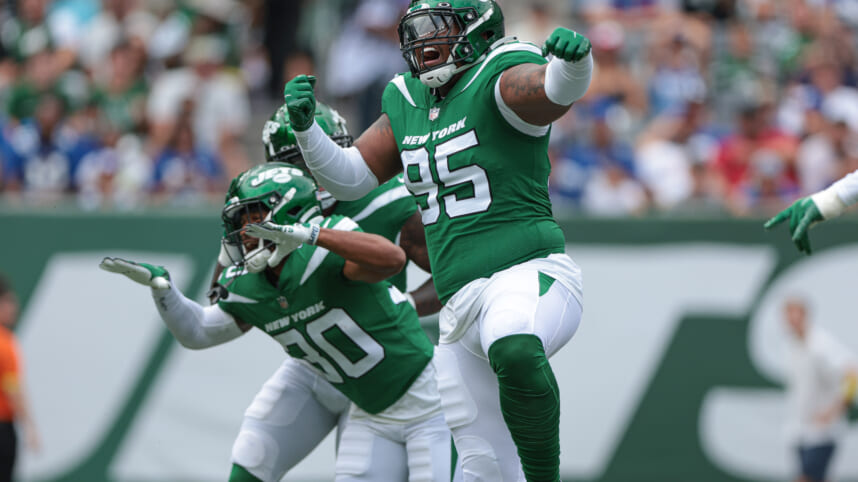 The defense of the New York Jets is a big part of the reason why the team is off to a promising 4-2 start. From front to back, the unit is relatively close to being complete. The group has talent on all three levels and is playing complementary football.

The lone category the Jets rank outside the top half of football is in points per game. However, they do rank 17th and are averaging 21.3 points allowed per game.

Regarding turnovers, the Jets are tied for fifth in interceptions. They have a total of seven in six games—extraordinary progress from a year ago, when the Jets had seven total interceptions the entire season.

With the three fumbles the Jets have picked up, they have 10 takeaways overall, an average of two per game. The unit is tied for fifth in football when it comes to turnovers.

Also, up front, against the run, the Jets are giving up 3.9 yards per carry which is the fourth-best in the game.

Highlighting the catalysts to this terrific defense:

Starting up front with the defensive line, the Jets have many noteworthy players giving big-time contributions. Quinnen Williams is potentially the Jets’ best player. His dominance as both a pass rusher and run stopper has placed him as not only one of the best defensive tackles in football but one of the top players in the game right now.

From there, tons of players are worth highlighting. Whether it be Sheldon Rankins, John Franklin-Myers, Carl Lawson, Bryce Huff, or Jermaine Johnson, many defensive linemen have given the Jets a talented front with tremendous depth. Collectively, they have stopped the run at an excellent clip while generating the needed pressure.

Then, up to the second level, the linebacker trio that C.J. Mosley, Quincy Williams, and Kwon Alexander have formed is one of the more underrated headlines with this team. Mosley has been the veteran people expect him to be. He quite possibly had his best game with the Jets in the win Sunday against the Packers.

Williams’ rapid development is one of the most exciting components of this team. He always had the speed and physicality. Cutting out the mental mistakes, we are seeing Williams live up to his potential. Finally, with Alexander, what a summer signing. He has brought leadership, energy, and an attitude to the defense. His speed has been on display whether it be playing the run or in coverage, Alexander has helped the Jets.

Finally, in the secondary, the Jets have another elite trio of players at the cornerback position. With Sauce Gardner and DJ Reed on the outside and Michael Carter II in the slot, the three have propelled the Jets’ pass coverage ranking toward the top of football. Also, when needed, Brandin Echols has filled in and stepped up, proving himself as a valuable backup.

Jordan Whitehead and Lamarcus Joyner have given the Jets the needed veteran experience at safety. Whitehead has brought the fast and aggressive playing style he is known for. Joyner has helped with four of the Jets’ 10 turnovers, all of which have come from him in the last three games. Lastly, Joyner has played 100% of the snaps for the Jets’ defense in every game so far this year, 395 in total.