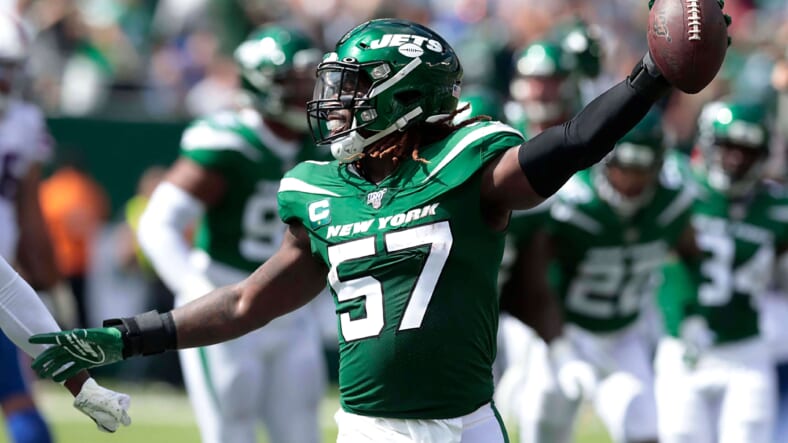 After signing a blockbuster contract in 2019 free agency, the New York Jets are getting the best play yet from linebacker C.J. Mosley.

Mosley, a nine-year veteran, respected for his leadership, winning experience, and smarts, has been a strong contributor to the Jets’ seventh-ranked defense.

This recent success comes after playing just two games in 2019 and opting out in 2020. His 2021 play, while fantastic at times, was inconsistent. Now, even at 30 years old, in the second year of Robert Saleh and Jeff Ulbrich’s defense, Mosley is playing great on a week-to-week basis for the unit.

Mosley has filled up the stat sheet through nine games of 2022 for the Jets. He has 88 total tackles (55 solo), three tackles for loss, a sack, a quarterback hit, a fumble recovered, and four passes defended.

Mosley has tallied double-digit tackles in six games, with a high of 13 in one game. He is averaging 9.8 total tackles per game. That puts him on pace for 166, which falls just short of his 168 from a year ago.

His 88 total tackles have Mosley tied for the third-most in football. The 55 solo tackles currently place Mosley fourth in the NFL.

He possesses the size and physicality to be stout in the middle against the run, where he has been a main catalyst to the Jets’ eighth-ranked run defense. Against the pass, Mosley has also been an anchor in zone coverage and in pursuit, with recent no game better than the start he had against the Green Bay Packers. His big play reading and reacting in zone coverage from last Sunday has gone viral.

Mosley’s instincts have always been a top attribute of his game. Pair that with his work ethic and experience, and he can quickly react to plays like the one above and make his impact felt physically.

Over the last two years, Mosley has been the Jets’ defensive captain. He is one that is easy for teammates to respect with his winning resume and longevity of individual dominance. His leadership intangibles are just an added bonus to his highly successful on-field play.

Even with the Jets’ recent success, enjoying a 6-3 start, Mosley is still talking about the team not getting complacent during the bye week, using the week of rest to their advantage. The exact type of attitude the Jets signed him to bring.

While a different regime brought him in, this was the type of player the Jets signed Mosley to be. He is in the middle of his best year with the Jets playing some great football. For the Jets’ dominant defense and team as a whole to keep on winning games and get to the playoffs, continued strong play from Mosley will be essential.