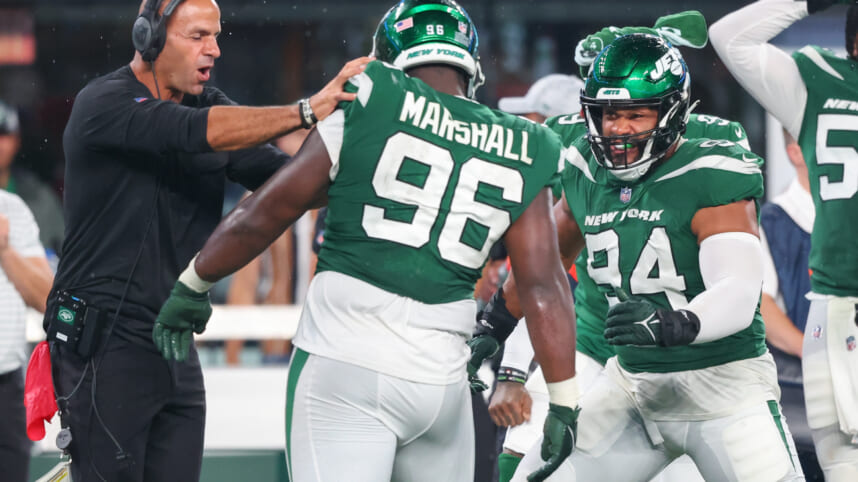 With two preseason games in the books, there are just a few days of training camp left. It signals that the 2022 New York Jets are close to having their roster down to 53 players.

Five days from today, general manager Joe Douglas will have to trim the roster greatly. The Jets do have some hard calls to make at various positions. Let’s take a look at how things currently seem slated to go.

If Chris Streveler puts together another good game on Sunday, it will be interesting to see how things play out come final cuts. As of now, though, it still feels early to definitively say he is ahead of Mike White from the team’s view. Streveler has at least played himself onto the practice squad to continue to further his development.

The Jets have some quality running back depth. It leads to difficult decisions in terms of letting players go. Rookie Zonovan Knight had a big kick return Monday night and should be stashed on the practice squad. La’Mical Perine has shown some good things in the first two preseason games. Ty Johnson offers great speed and some experience to this young group.

Ultimately though, Breece Hall, Michael Carter, and Tevin Coleman are locks. Coleman knows this system well and provides a veteran presence with the youth here. Finally, with Hall and Carter set to take on most of the reps, it leaves a limited amount making it tough to warrant keeping a fourth running back.

This group is an exciting one for the Jets with speed and potential. It is tricky to say one way or another how the Jets truly feel about Denzel Mims. Currently, though, it seems unlikely that he is a part of this final roster. Between first and second-year players Calvin Jackson, Irvin Charles, and Tarik Black, who have all shown some intrigue, it will be interesting to see who the Jets prioritize and are able to retain on the practice squad.

Lawrence Cager made big plays once again in the second preseason game. With just five wide receivers, Cager can offer the Jets flexibility as a sixth with his past experience at the position. Tyler Conklin, CJ Uzomah, and Jeremy Ruckert are all capable blockers, making keeping a receiver in Cager at the tight end position affordable. His speed, ability in space, mismatch potential, and upside athletically as a young player make him worth keeping on the final 53.

Whether or not the Jets look to acquire a tackle to bolster the depth through waivers or a last-minute trade before final cutdowns will be worth monitoring. Conor McDermott has been out since the Green and White Scrimmage nearly three weeks ago. The decision on Chuma Edoga is a bit of a fascinating one that could go either way. This starting five has talent and now just needs time together to gel.

This group has impressive starting talent and incredible depth. Two tough decisions here are 11-year veteran Vinny Curry and the star of the second preseason game, Bradlee Anae. If Bryce Huff continues to miss time, he could start the year on an injured reserve list, making room for Curry or Anae. Anae has contributed in camp and done enough to be a practice squad priority.

For the first time Monday night, second-year player Jonathan Marshall showed us a glimpse of his athletic potential. Marshall, who had a 9.99 Relative Athletic Score in last year’s pre-draft process, the second best of a defensive tackle from 1987-2021, was active with a few splash plays against the Atlanta Falcons. Between Marshall and Tanzel Smart’s preseason success, they should be ahead of Nathan Shepherd at this position.

The first four here are final roster locks. With the fifth linebacker, there may still be a battle up for grabs between Hamsah Nasirildeen, Marcell Harris, and Del’Shawn Phillips. Going with Nasirildeen here has to do with his youth, lack of experience as a 2021 draft pick, and the skill set he does offer.

This revamped position group with Sauce Gardner and DJ Reed will be exciting to watch. The value that Justin Hardee provides Brant Boyer with on special teams gives him the nod over second-year corners Isaiah Dunn and Rachad Wildgoose, who could be priorities for the practice squad.

The main battle here is between Will Parks and Ashtyn Davis for the fourth safety. The first three players are locked in. Parks had yet another strong showing for himself against the Falcons. He plays with toughness and offers veteran leadership. Davis was working with the third team in Monday’s preseason game. He or rookie Tony Adams could land on the practice squad.

We got official confirmation two days ago that the Jets will go with Greg Zuerlein as their kicker. With no competition brought in for Braden Mann this offseason, these three specialists are currently set for the Jets’ final roster.