This Week Will Define the Islandersâ€™ Season 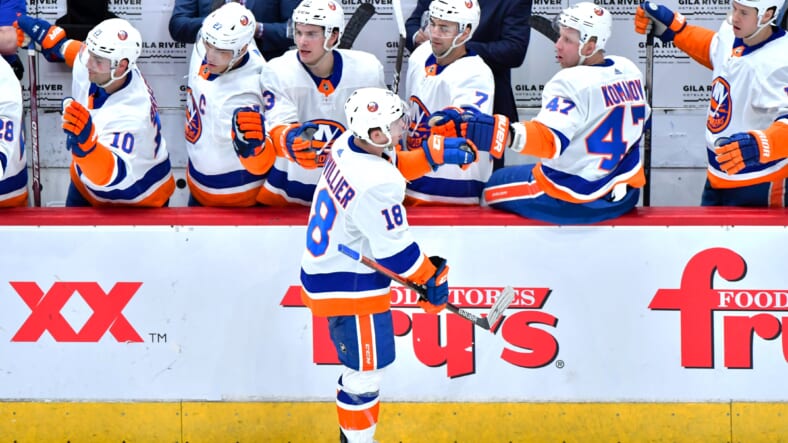 The time for messing around is over for the New York Islanders.

With 15 games left in the regular season, the Islanders find themselves on the outside looking in of the Eastern Conference playoff picture as they head out for an arduous road trip which begins in Western Canada tomorrow night in Vancouver and will end in Pittsburgh Sunday afternoon.

Their controversial overtime defeat Saturday afternoon to the Carolina Hurricanes was the team’s six straight loss (0-5-1) and their ninth loss in their last 11 games. That brutal stretch coupled with Carolina’ and Columbus’ wins yesterday only makes this upcoming trip that much more crucial.

“It’s a huge point when you’re down and haven’t been winning lately,” Head Coach Barry Trotz told the media following Saturday’s game. “We’ve just got to keep grinding. Every point counts. The point that we got maybe the point that helps us get in, or the point we lost may keep us out. We’ll see how that plays out, but we climbed today. We climbed a little bit. That’s really key.”

Over the years, the Western Canada trip has been an essential moment in the Isles’ season. Last year just around the same time exactly, they went 1-1-1 against the Canucks, Oilers, and Flames. The difference between this year and last year is that a year ago, the Islanders were secured in a top-3 spot of the Metro Division. The challenge facing them this week out there has more significant stakes at hand, especially with a possible playoff matchup also being the final stop before they return home.

The Islanders, other than the losing streak, are still battered and bruised. They’re still without Casey Cizikas, who head coach Barry Trotz did say after the game Saturday will travel with the team for the trip, and won’t have Johnny Boychuk available. Even Cal Clutterbuck â€” who was not in the lineup Saturday after also sitting out the entire third period of the loss in Ottawa â€” is still not close to being 100%.

They did see some good things out of rookie Noah Dobson, who had his best game as a pro on Saturday. He had the assist on the tying goal by Josh Bailey late in the game, and maybe it’s a sign of things to come. Dobson’s effort is just one example of that next level this team needs to show if they are going to still want to have games that matter here in these last few weeks.

They need to take how they performed in the third period against Carolina â€” being the more desperate and hungry team â€” and transfer it over to these next four contests. They also need to use how they lost in that game and use it as a chip on their shoulder. Heck, they should even use that setback as a confidence booster.

None of this week will be easy.

The Canucks are fighting for their playoff lives, while the Calgary and Edmonton are two and three in the Pacific Division. Oh, then there’s that Connor McDavid-Leon Drasaitl duo who can dominate games together and on their own. And don’t forget about that other superstar twosome who have killed the Isles throughout their careers â€” Sidney Crosby and Evgeni Malkin.

To be honest, a trip of this magnitude might be the best thing for this Isles team. We will come to know who exactly this squad is and if they’re battle-tested. It will also answer the question of whether or not they deserve to be a playoff team.

There’s really nothing more you could ask for if you’re a fan. These are the games you want to watch.Â Simply put, the Islanders’ season could come down to this trip.

And with that said, it might very well be the defining moment of their season.