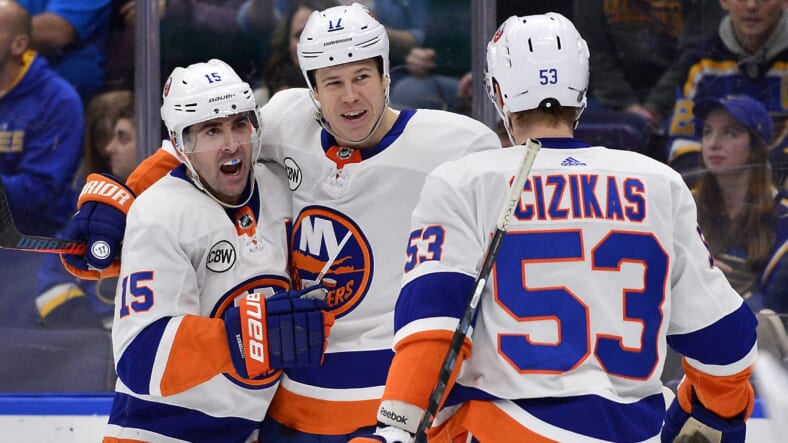 The offseason for the New York Islanders has gone quiet recently. Their last big transaction came a few weeks ago when the team shipped d-man Devon Toews to Colorado.

Soon though, things should pick up again, including the announced signings of free agents Cory Schneider, Andy Greene and Matt Martin.

The latter of those three signees has bigger implications.

Whether itâ€™s a one or two-year deal for Martin, it seems like the end is near for the Islandersâ€™ fourth line, formally known as the â€œIdentity Lineâ€.

As The Athleticâ€™s Arthur Staple pointed out in the first of his three Isles mailbags this week, Casey Cizikas has probably priced himself out for the organization to retain him when he hits the market next season. That in part because of the flat cap and Adam Pelech, Anthony Beauvillier and Ilya Sorokin all needing new deals.

Furthermore is Cal Clutterbuck will have one year left on five-year, $17M deal he signed back in 2016 and will certainly be one of the forwards exposed in the expansion draft for the Seattle Kraken who begin play following this season. Martin will also likely be along with Clutterbuck in that group when he is signed.

They became the embodiment of what it meant to wear the Islander crest and also earned the reputation as the leagueâ€™s most formidable fourth line, which is a title they still hold in many peopleâ€™s eyes. Theyâ€™ve even been called the best to ever do it, according to legendary analyst Don Cherry.

Cherry dubbed them â€œThe Best Fourth Line Ever in Hockeyâ€ in 2015.

Under head coach Barry Trotz, the line was reborn and is one of the major reasons for the success the Isles have sustained the past two seasons.

We always talk about them as the fourth line, but they are a very useful line for us,” Trotz told the team website a while back. â€œThey give you impact.â€

That impact was no more evident than this past postseason. Martin had five goals in 22 games, marking more than he had in the regular season. Cizikas â€” who suffered an eye injury in the Conference finals versus Tampa â€” and Clutterbuck played hurt and had clutch moments throughout the teamâ€™s run.

â€œWhen they are playing the right way, they give you a little of that bite that you want. They give you sort of that determination and speed on the puck and sort of an Islander identity. If there’s a line that’s sort of an identity line, well that’s the best way to describe them better than a fourth line because they give us an identity.”

All good things must come to an end though.

This one might hurt a little extra because of how much Martin, Cizikas and Clutterbuck are respected in the room and how much they make up the very fabric of the team.

This coming season will be interesting enough in a number of ways. Late start date, possibly no fans, travel restrictions, and who knows what else.

But for the Islanders, it will be interesting because it could mark the end of one of the most beloved era in recent memory.