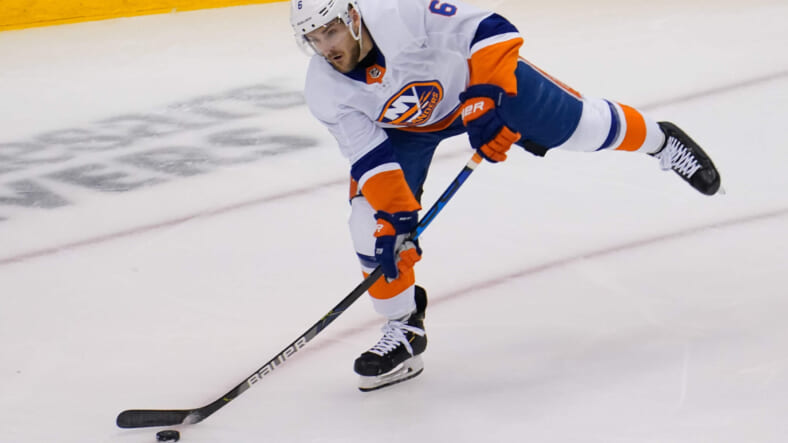 Watch the Islandersâ€™ overtime against the Bruins from Tuesday and youâ€™ll notice something out of the ordinary: d-man Ryan Pulock out on the ice for over two-plus minutes. Usually in the 3-on-3 format, defenders arenâ€™t supposed to be out for very long shifts so they can conserve energy. But there was Pulock, #6 in blue, riding out that stretch in just another example of why heâ€™s played such a intricate role in the teamâ€™s success throughout this season.

Pulock hasnâ€™t scored any goals to this point, which has left many dumbfounded because heâ€™s got such a wicked shot. Itâ€™s in every other area of his game that has him trending further towards elite status.

â€œI want to chip in,â€ he said earlier this week. â€œBut at the same time, if I look at my game and Iâ€™m honest with myself, I feel my game is in a really good spot. Iâ€™m playing pretty well and contributing to the success the team is having in other ways.â€

The Manitoba nativeâ€™s offensive side has shown out this year â€” ten assists in 26 games â€” but it’s the strides in Pulockâ€™s defensive game, playing shutdown minutes with fellow No.1 D Adam Pelech, where he continues to progress. Heâ€™s already surpassed his average time on ice in his career playing a steady 22:28 this season. The proof is also how heâ€™s been tasked to defend some of the best the East division has to offer. Even two nights ago, he and Pelech saw a heavy dose of â€œThe Perfection Lineâ€ (Brad Marchand, Patrice Bergeron, David Pastrnak), and while two of them got on the scoresheet on the man-advantage, they were relatively quiet at even strength.

Great defensive play by Ryan Pulock to break up the 2-on-1 #Isles pic.twitter.com/aV69zMZIMc

Credit is due to Pulock, who for so long was always perceived as an offensive producer. Heâ€™s now a bonafide two-way defensemen and hasnâ€™t even reached his prime yet.

The Isles committed to Pulock this offseason for two more seasons most likely with the aspirations of what theyâ€™re seeing from him now. Despite being without a goal on his ledger, that contract was terrific then and looks even better as the Islanders continue to roll.

Hopefully the goals will come for Pulock. He has already thrown 50 shots on goal through 26 games, the most for an Islander defender. It would be a reward for what has been an excellent campaign from him overall.

A lot of the fanfare this year has been around Mathew Barzal dazzling, Noah Dobson and Oliver Wahlstromâ€™s emergence, and the sensational goaltending the Isles have received. But Pulock, heâ€™s just stayed in the background and been lights out this season.

You wonâ€™t hear his name in the Norris conversation and that shouldnâ€™t matter. Pulock has found another level to his game.

That needs to be recognized as the Islanders arenâ€™t having the success they do without his presence.

The Isles will welcome back fans to games this evening against New Jersey for the first time in 369 days. While it will only be a little over 1,000 people, they will be health care workers who have put their lives on the line since COVID-19 took over our reality at this time a year ago.

It should be a tremendous scene, and if the video the team released yesterday is any indication of what to expect, it will be an emotional night.