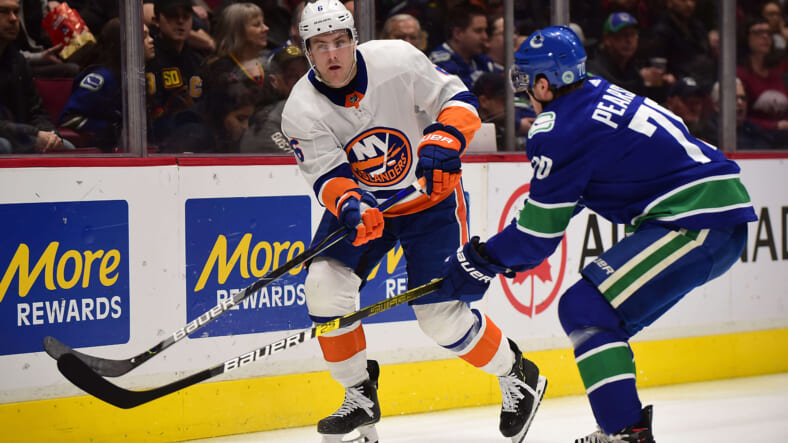 The New York Islanders have relied on many things to help turn them into one of the top teams in the NHL over the past two seasons. Their defense being one of them.

The Islesâ€™ D is considered one of the best in the game not just from a structure standpoint but a talent standpoint. Even with the loss of Devon Toews just over two weeks ago â€” he was traded to the Colorado Avalanche for two second round picks â€” the backend for the team still remains relatively deep. Noah Dobson is expected to fill Toewsâ€™ role once next season begins.

But, if thereâ€™s one thing thatâ€™s lacking from the blue line, itâ€™s that thereâ€™s no one who can be considered elite. You look at teams who have won or played the Stanley Cup recently, and theyâ€™ve all had an superstar defenseman. Tampa Bay has Victor Hedman. Dallas has Miro Heiskanen. St. Louis had Alex Piertrangelo. Boston with Charlie McAvoy. And the Capitals with John Carlson. The Islanders donâ€™t have someone of that echelon.

The closest, or maybe another peg down, is Ryan Pulock.

Thereâ€™s no question Pulock is a solid, reliable d-man; heâ€™s averaged just over 22 minutes of ice-time the last two years and had totaled 28 and 25 points respectively. In the bubble playoffs Pulock also tied for the most points for a d-man on the team with ten with the now-departed Toews.

Out of those postseason points, only two of them were goals. And there lies whatâ€™s keeping the 26-year-old from reaching that next level: Pulock needs to find the back of the net on a more consistent basis.

Pulockâ€™s biggest weapon since he was drafted in 2013 has always been his shot. Itâ€™s deadly. Its 100 miles-per-hour. Yet, even being in the NHL for five seasons now, the Dauphin, MB native has still yet to hone it in a way that could turn him into a big-time contributor.

Sure, heâ€™s tallied ten goals in the regular season two of the last three seasons. But for someone with his type of ability, Pulock should be closer to 15 or maybe more tucks a season even for a team like the Isles which sacrifices more offense for defense.

The Islanders could also use the extra production from Pulock too. The offense lacks finishers as currently constituted. Pulock becoming one of those guys especially on defense â€” with the shot he possesses â€” would really provides an extra boost in more ways than one. Also, with Toews off to Colorado, the Isles are going to depend on more offense from Pulock. As Sean points out above too, itâ€™s special teams where Pulock must become more effective.

Although theyâ€™re most likely going to throw Dobson straight into the fire, and even with how the defense shakes out come training camp, Pulock will still be looked at now as the main source of attack.

Pulock and the Islanders are set for arbitration next week. The expectation is he could be looking at between $5-6M. Those numbers are just below what an elite d-man in todayâ€™s NHL makes.

He is on the verge on being an elite level defenseman in this league. One thing holding Pulock back is his offense. Making that element a strength will put him in a new light and give the Islanders another dynamic that they could certainly use.