The Noah Dobson era is officially here for the Islanders 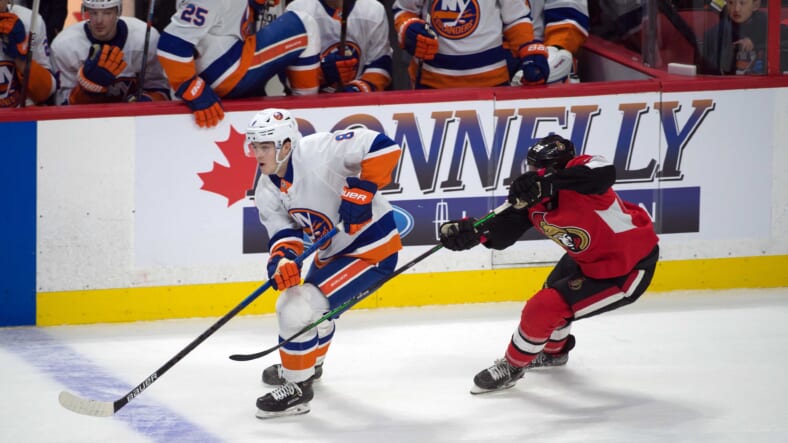 While the New York Islanders deal with the aftermath of the Devon Toews trade and wait for the impending move of veteran Johnny Boychuk, another era has officially gotten underway.

Dobson, the 12th overall pick from the 2018 draft, has now earned his place as the next in line to be the centerpiece on the Islanders’ defense.

The highly-touted rookie spent all of last season with the Isles, in part due to the organization not wanting to send him back to juniors and the inability to have him play in the AHL because of age restriction. Dobson played in 34 games for the Islanders and tallied a goal and six assists. The 20-year-old also suited up in the Islanders’ last game of the playoffs, the 2-1 OT loss in game six of the Eastern Conference Finals to the Tampa Bay Lightning. In that contest — his only appearance in the postseason — Dobson didn’t look out of place and showed right then and there he was ready for the challenge of being a top-four defenseman in the NHL.

Now he’ll get his chance to reward the organization’s faith in him. With Toews off to Colorado, Dobson is the one expected to step up in his place.

â€œWe would not have made this move if the ice time that Devon received, we didnâ€™t have the ability to put a player into that,â€ Lamoriello told reporters on Monday after the Toews deal. â€œAnd Noah Dobson, we feel, is certainly ready to take the next step so weâ€™ll have to just wait and see.â€

Not since Ryan Pulock, and the aforementioned Toews, has the franchise been so high on one of their blueliners. After all, Dobson was a top-15 pick and was one of the top defensive prospects in his draft class that included Rasmus Dahlin, Quinn Hughes, Evan Bouchard, and Adam Boqvist; out of those five, he, Hughes, Boqvist and Dahlin have had a significant impact on their clubs thus far. Add to that, his dominant junior career. The Summerside, PEI native became one of the premier defenders in his time in the QMJHL, received a ton of accolades, and won back-to-back Memorial Cups with Acadie-Bathurst and Rouyn-Noranda.

Dobson definitely has the capabilities of being elite at both ends of the ice. Who knows, maybe there’s a possible Norris Trophy down the road. Some experts did say when he was picked that Dobson could turn out to be just that good.

Let’s not get ahead of ourselves though, we’ve only seen a small sample size of what he’s is truly capable of.

Despite that, his real arrival is coinciding with where the Isles are as an organization — on the cusp of something truly special.

The Islanders are coming off their second consecutive postseason appearance and their deepest playoff run in 27 years. They’re also in “win now” mode and on the verge of being a Stanley Cup contender for years to come. In addition, they have one of the best coaches in the league in Barry Trotz, a 25-year-old stud goalie who is their future in goal named Ilya Sorokin and one of the top defensive units in the league. Dobson becoming a major player of that core only provides even more excitement.

“Our back end is really, really good and Dobber is going to be a big part of the future,” Trotz said a few weeks back.Â “And the now, I guess, because weâ€™ll be into the next season very shortly here. Heâ€™ll be a big part of it going forward.”

The start date for next season still hasn’t been announced, but when it does, Dobson will be the one to watch. Whether that means he’s a part of a third-pairing with Andy Greene — the two were the club’s best duo heading into the postseason bubble and Greene most likely being back with the organization based on Lamoriello’s words a few days ago — or slated in the top-four and helping on special teams, the spotlight will be on him.

Dobson is set to turn 21 next month. By then, he will officially no longer be a teen. Not only that, he’ll be the face of the future on the backend for the Islanders.

There are still changes coming for the Isles, but one big one has already taken shape. It’s Dobson and the beginning of his ascent in the organization.

His time is officially here.