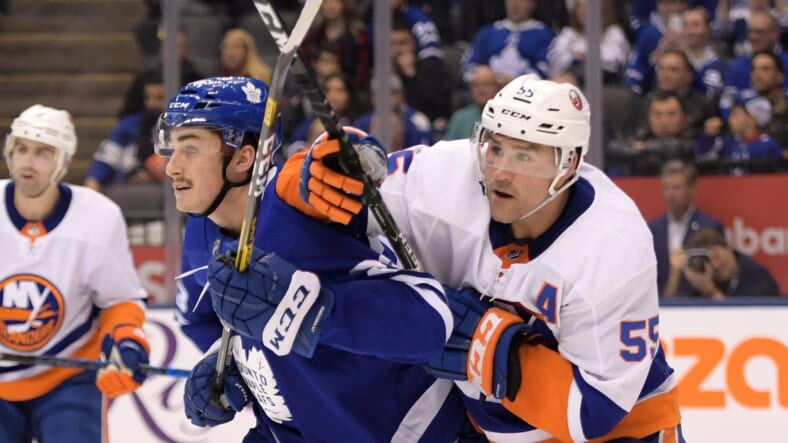 As the sports world still deals with the coronavirus pandemic as its latest enemy, it seems like the perfect time to talk about rivalries. In the Islanders’ case, things have definitely changed over time since the team first came around in 1972 regarding their biggest rivals.

Just this morning inÂ The Athletic’sÂ fan survey of the team, one of the questions asked is who is the team’s biggest rival?

The choices given were the Rangers, Capitals, Hurricanes, Penguins, and others.

All four of those clubs deserve major consideration for being the Isles’ top adversary.Â  There have been memorable and not so memorable moments with each of those foes over the past few years.

But with all due respect to them, the organization’s most heated antagonist right now is: the Toronto Maple Leafs.

As much as people want to still say it’s the Rangers (the teams share a market) or the Capitals (a classic seven-game playoff series in 2015 and some knockdown, drag ’em out showdowns in the regular season over the past few years), there’s a number of reasons why the Leafs take the cake.

There’s just a certain type of electricity now when the Isles and Toronto square off. Even before John Tavares decided to bolt for his hometown club, the clubs always seemed to elevate their games against each other.

Now some would say the Islanders and Leafs not being division rivals means it’s not a true rivalry. But the two teams have had animosity for awhile now.

Back in 2002, the Islanders met Toronto in the first round of the playoffs after a renaissance campaign where they recorded 96 points and clinched the franchise’s first postseason berth in eight years. That series went seven games and was one of the most physical, grueling, and vicious series ever played in the history of the Stanley Cup Playoffs. The Leafs would outlast the Islanders, but the result was a newfound hatred for each other.

Fast forward to 2007: The Islanders need a win over the Devils on the last day of the season to secure the eighth and final playoff spot in the East; they had defeated Toronto earlier in the week which helped put them in that position.

New Jersey made the interesting decision to start backup goalie Scott Clemmensen over starter Martin Brodeur. The Isles took advantage of that call, winning the game in a shootout 3-2 and knocking the Leafs out from the playoffs in the process.

This past decade saw the Islanders and Leafs share almost a similar path.

Both clubs were rebuilding early on and are now two of the more prominent teams in the league. They’ve shared players — Matt Martin, Michael Grabner, Mikhail Grabovski, Nikolay Kulemin, and the aforementioned, Tavares. Shared executives and coaches. Lou Lamoriello — who was general manager in Toronto from 2014-18 — is now running the show on Long Island; Goaltending coach Piero Greco and assistant coach Jim Hiller were in the Leafs’ organization before joining the Islanders.

Toronto, and most of it from the media, has always looked down upon the Islanders for some reason. While that may not have an effect on the ice, it just adds to the intensity that two fanbases show off it.

Before Tavares became a Leaf in 2018, the media and Leafs fans were nonstop in their thinking that he would leave the Islanders to come play for them once his contract expired. Isles fans brushed off the notion that their franchise star would spurn them for the team he grew up rooting for. When he did, the distaste for the organization and their supporters.

That’s why when Tavares made his return to Long Island a year ago at the end of February, fans made sure to let him know how hurt they were by his decision.

The blow of Tavares leaving has begun to soften a little bit after the success the Isles have had since he left. Then again, the quiet rivalry between him and the organization’s new face — Mathew Barzal — seems like it could play out over the rest of their careers.

It’s not just those two individuals though. The teams are complete opposites of each other, which has made their clashes and will make future contests even more entertaining. Hopefully, there’s another playoff series between them down the road. The headlines would be glorious and social media be set on fire.

The Islanders have been known for having some intense rivalries, but whether you agree or disagree, none are as hotter or juicier than the one they have with the Toronto Maple Leafs at this moment.