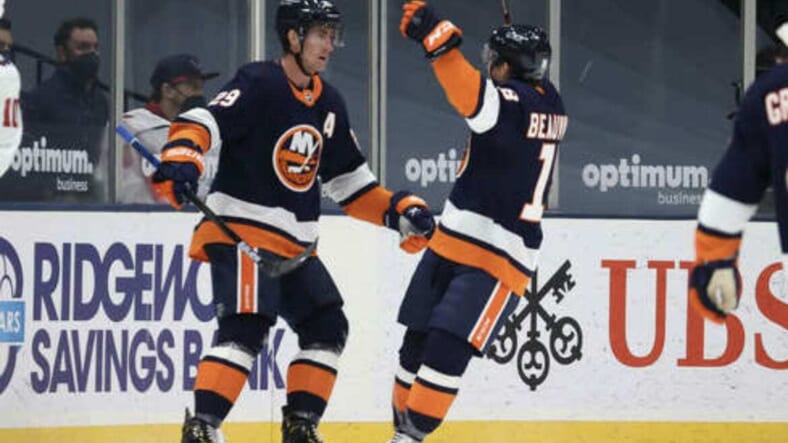 Thereâ€™s been a lot of efforts from the Islanders out of their first 39 games that can be spotlighted for how good they were. None though might have been more important and more impressive than last nightâ€™s 1-0 shutout win over the Washington Capitals, which put them back in a tie for first place in the MassMutual East Division, and had a playoff-feel to it from start to finish.

The two teams met just six days ago with the Isles putting up an eight spot on the Caps in a 8-4 win. So you would think last nightâ€™s tilt would be the polar opposite. Youâ€™d be correct. But from an Islanders perspective, the game played right into their wheelhouse â€” low-scoring and tight checking.

The difference though is that last night, there were very few instances â€” a couple shifts in the second period â€” during the contest where the Blue and Orange werenâ€™t the better team. From the outset, they peppered Capitals netminder Vitek Vanecek, who was tremendous all game. The Isles ended the night with 39 shots on goal, 20 of those which came in the third. If not for all the posts and crossbars they clanked, the final score could have read differently in their favor. All four lines had chances and were rolling for the entire game, and it was more than noticeable in the final frame leading up to Brock Nelsonâ€™s game-winner which came with just before the seven minute mark of the third.

“We just wanted to stick with it, elevate our game and pick up the pace a little more in the third,” Nelson told reporters in the postgame. “I thought we did that. We had quite a few good looks. We weren’t able to capitalize, but we found a way going into the third to win a hockey game, which is huge.”

From a defensive and goaltending standpoint, the performance was spectacular. Semyon Varlamov looked locked in from the get-go and he made some game-saving stops in what could be argued as his best game of the year. The Islesâ€™ D held the Caps first line â€” Alex Ovechkin, T.J. Oshie, Evgeny Kuznetsov â€” to a combined five shots all game. True to their identity, they also shut the game down once they had the late lead.

Another huge save by Semyon Varlamov #Isles pic.twitter.com/oAC0Q7Agvk

A game like the Isles played last night showed why they are one of the better teams in the league. Considering the opponent and the stakes raised from their previous encounter, that type of effort is essential for what they will need to go far in the postseason again.

Make no mistake, Barry Trotzâ€™s crew has had some great wins as the season has rolled along. Two of their five over Boston â€” the comeback win three weeks ago and the 7-2 shellacking in late February â€” definitely are right up there. But yesterdayâ€™s win felt bigger.

Thereâ€™s still another 17 games left to play in the regular season, and their could be other efforts that are better by the time the season concludes. Until then, the Islandersâ€™ triumph over the Caps last night qualifies for their most impressive all year long.

We all know how excellent Adam Pelech is as a defenseman. But he seems to love to take it to another level when tasked with stopping Alex Ovechkin.

Pelech left an indelible mark on Ovi with his shutdown performance of him in the bubble postseason last summer when the Islanders and Caps met in the second round. He was at it again last night, as seen by the clip below.

Hats off to Leo Komarov who was superb throughout the entire win last night. Uncle Leo did a little bit of everything to help contribute. He even came close to scoring and assisting on a chance late in regulation by Mathew Barzal which would have doubled the Islesâ€™ lead.