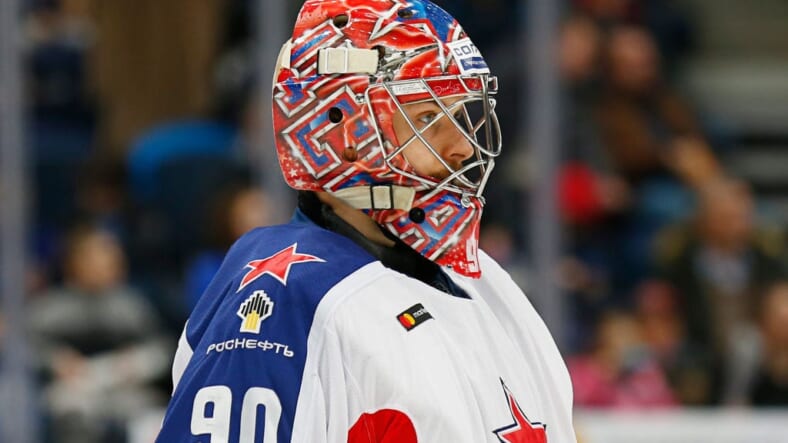 MOSCOW, RUSSIA – JANUARY 08: Ilya Sorokin #90 of the CSKA looks on against the Dynamo Moscow at the Arena VTB Moscow on January 8, 2020 in Moscow, Russia. (Photo by Anna Sergeeva/ Getty Images)

Yesterday was a moment the New York Islanders took another crucial step as a franchise towards the future.

Ilya Sorokin, the 24-year old Russian goalie phenom whom the Isles drafted 78th overall in 2014, has made the decision to make the transition to begin his career with the organization. According to Sports-Express KHL reporter Igor Eronko, Sorokin is set to sign with the Islanders when his current contract with CSKA Moscow expires on April 30th.

This news, coming during the midst of the coronavirus pandemic, gave Islander fans some much-needed joy looking at the reaction of social media.

Sorokin’s decision shouldn’t come as a surprise. Isles G.M. Lou Lamoriello has stayed confident he would sign after receiving indication multiple times throughout this season, and reiterating said confidence in a Q&A with fans a few weeks ago.

The dominoes began to fall starting last week when his fellow Russian, d-man Alexander Barabanov, became the first of several KHL players ready to sign on with their respective clubs who drafted them; in this case, it was the Toronto Maple Leafs. And he, Sorokin, having dominated in his native homeland for the last five years, plus his friend and rival — Igor Shesterkin — now starring on Broadway, the NHL was the only place left to go.

There’s no need for speculation anymore. Sorokin is coming, and the Isles’ long-awaited search for a franchise goalie has hopefully finally come to an end.

You have to go back 20-plus years to find a goaltender who had fans this giddy and who’s arrival had this much hype.

Sorokin has widely been considered the best goaltender outside of North America. He’s a five-time KHL All-Star, won the 2019 Gagarin Cup, and was named playoff MVP, and numbers in his KHL career were magnificent. In 313 games played, he went 184-81, had a 1.62 goals-against average, and recorded an astounding 60 shutouts. This year, his record was 26-10-3 in 40 games played, and in the playoffs, he went 4-0 in four games with two shutouts and a .966 save percentage.

The fact that the Islanders are getting Sorokin now — after they brought in Barry Trotz as head coach two years ago, have goaltending guru Mitch Korn and respected coach Piero Greco, and have assembled one of the most underrated defensive cores in the league — bodes exceptionally well for the franchise to have constant success in the coming years.

Are there still a few things that still need to improve? (cough) the offense. But Lamoriello and Trotz have been building the foundation since they took their respective roles. Now they have a young, stud goaltender at their disposal to add to the core of Mathew Barzal, Jordan Eberle, Brock Nelson, Adam Pelech, and Devon Toews.

It’s still unknown when Sorokin will first suit up in orange and blue. His friend and fellow countrymen, Semyon Varlamov, will be the presumed starter if this season resumes or to start next season. Thomas Griess, who was set to become a UFA at the end of this season, will probably be moving on. The Isles could also start Sorokin in the AHL, going the route the Rangers did with Shesterkin.

Whichever way it plays out, Sorokin should be ready for prime time.

The phrase “the future is finally here” has been uttered many times over the past few years with the Islanders. The news of Sorokin coming has just accelerated that statement tenfold.

Picture this, the Islanders opening their brand new home at Belmont Park in October 2021. In between the pipes, Ilya Sorokin.

That’s no longer a dream. It’s a reality.