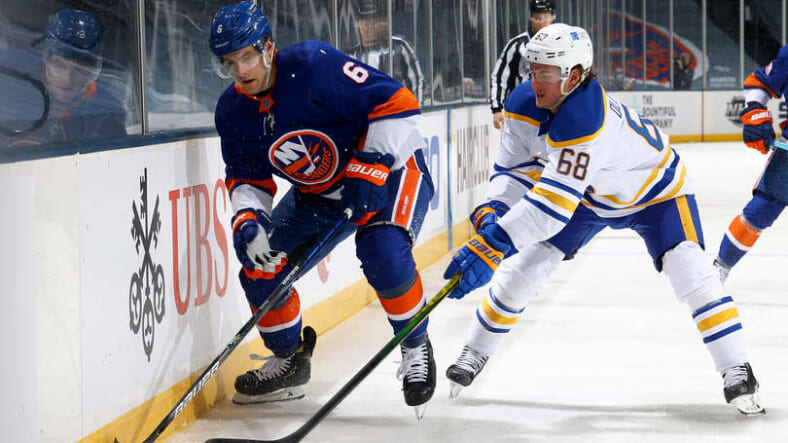 As the Islanders get set to play the Buffalo Sabres three times in a row starting tonight, the difference between the two teams trajectories couldn’t be more contrasting. The Isles are near the top of the MassMutual East Division — currently in second place — and are 9-2-2 in their last 13 games. Buffalo sit dead last in the division and 2-7-1 in their last ten games.

The turmoil surrounding the Sabres right now is something the Islanders are all too familiar with, having been in the same situation just a few years ago.

Before Lou Lamoriello and Barry Trotz swept in with the winds of change, the Isles were dealing with fan unrest for both ownership and management for a long time. The team overall kept failing to get better and couldn’t support their franchise star, John Tavares, despite making the playoffs two straight seasons in 2014-15 and 2015-16. The end result was Tavares spurning the Islanders — the team that had drafted him as their saviour in 2009 — to sign with his hometown Toronto Maple Leafs on the first day of free agency in 2018.

The Sabres, are dealing with a similar dilemma.

It’s been a decade since the franchise last achieved a postseason birth, and to be brutally honest they haven’t even come within a lick in that period of time. While they’re still in that malaise, they were fortunate enough to draft who they thought was their Tavares — Jack Eichel. Eichel became a Sabre at the 2015 Draft when the franchise chose him second overall after Connor McDavid went number one to Edmonton.

The belief that night was that all those years of losing had finally paid off.

Or so they thought.

In the six years since his debut, Eichel — the 24-year-old captain of the team — has evolved into one the NHL’s premier players, but the team he leads continues to be stuck in mediocrity. He’s yet to appear in a playoff game and things have gotten so bad that you can’t go a day the past season-plus without talk of Eichel wanting out of Western New York or a trade rumor.

Now neither Tavares, nor Eichel for that matter, had ever expressed their desire to be traded. But when a franchise really needs a shakeup to get things kickstarted again, you look to the top for where to start. Buffalo has tried to do that with several coaching changes and revamping its front office. The Islanders were a little late on that front, but they ended up getting it right with the Lou-Trotz duo. The proof is two straight years of playoffs and an Eastern Conference finals appearance this past summer.

I’m not saying the Sabres should trade Eichel. But how much more can they watch their franchise sink to new lows?

Right now it feels like there’s no light at the end of the tunnel inside the walls of KeyBank Arena and from their fanbase.

Those who followed the Islanders had that feeling once.