The Islanders have to find way to get Kyle Palmieri going 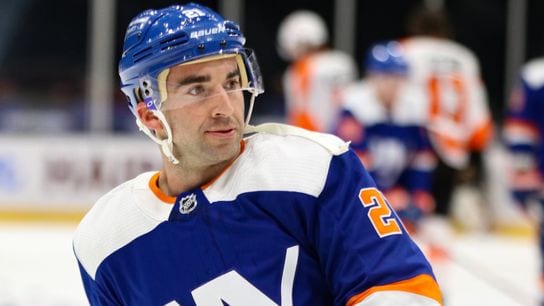 When the Islanders made their major deadline move for Kyle Palmieri and Travis Zajac a few weeks back, g.m. Lou Lamoriello acknowledged chemistry being one of the crucial factors that got the deal done. Itâ€™s something he and the organization value a ton. So it shouldnâ€™t have come as a surprise that Palmieri â€” and Zajac got that matter â€” would fit seamlessly with how the Isles play and are built.

Or so we thought.

Nine games since the deal got made and things really havenâ€™t gelled the way many have hoped for. The Islanders are just 4-4-1 in that span and their offense has once again been hit or miss. Palmieri â€” and he is more of the focus here because he was who the trade was centered around â€” has only registered a goal and an assist thus far in blue and orange. That certainly isnâ€™t going to cut it for someone fans had heard would add his goal-scoring prowess; Palmieri had tallied 20 or more goals in his previous four seasons.

Head coach Barry Trotz has tried to find him the right line mates, but nothing has translated to consistency. Palmieri himself looks like heâ€™s going through the motions too. Look being traded to a new team means adjustment, but after let say five games, playing in a new system should become easier to figure out.

“I think the first couple of weeks all youâ€™re really focused on is fitting in and getting to know the guys and the systems and being an impact [player],” Palmieri said last week. “They brought me in for a reason and thatâ€™s to come in here and help this team win.

So what can be done to get the 30-year-old finally going?

The options are limited. Palmieriâ€™s been on the third line, second line and the power play already. That leaves just one alternative: giving Palmieri first line duties with Mathew Barzal and Jordan Eberle. This might be the actual solution.

Palmieri can score and has an underrated shot that line has been lacking for a long time. Thereâ€™s been flashes of it over his short stay with the club so far.

Trotz indicated yesterday after his team practiced that he was going to switch some things up on the top line to find a spark following a bad 6-3 loss on Saturday night at home to the Capitals. Palmieri getting the call for that switch could be a huge motivator. It would show the trust the coaching staff has in him to do the heavy-lifting on that line despite he being more of a skill guy. Trotz has thrown Zajac and Leo Komarov up on that line recently because they play that heavier game. As great as that sounds for the kind of balance the Isles Â love having, production matters more in the long run. Thatâ€™s where Palmieri fits into that equation.

Furthermore, when he was in New Jersey before guys like Jack Hughes and Nico Hischier came around, Palmieri was one of the go-to guys and thrived in that setting.

The playoffs are mere weeks away and the Islanders need to have Palmieri at his best. They acquired him because they believe heâ€™s one of the pieces to the Stanley Cup puzzle. Itâ€™s crucial Palmieri begin to find his way. The Isles must help him do that beginning right now.

Yesterday marked the 46-year anniversary of the Islanders pulling off one of the greatest postseason comebacks in sports history, when they came back from down 3-0 to defeat the Pittsburgh Penguins.

One of the great tales from that series was Ed Westfall â€” the Islander who scored the lone goal in game seven which was also the game-winner â€” having to go out for beers with the Penguins after the win because the Isles players had already abandoned the locker room while Westfall was showering.

The newly announced deal between the NHL and TNT could lead to some legendary television. Just imagine it now, Charles Barkley critiquing Mathew Barzal when the puck is on his stick. Iâ€™d pay a lot of money to watch that.