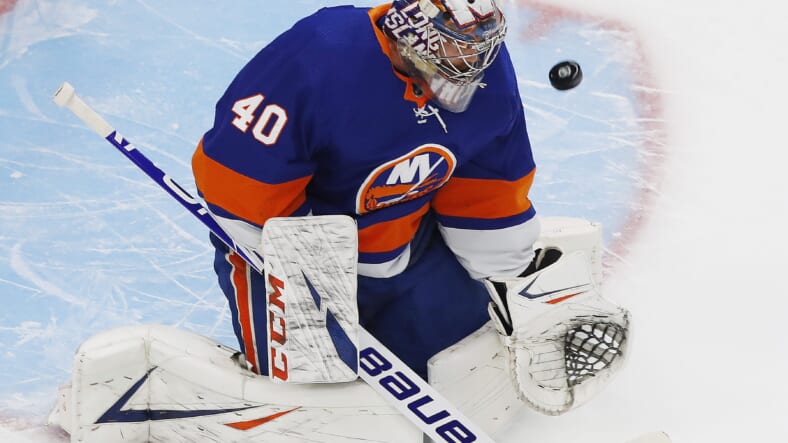 Itâ€™s been a few days now since the New York Islandersâ€™ fantastic playoff run came to an end. That time has allowed for a lot of reflection on how they got as far as they did and what the future may hold heading into next season, whenever that begins.

One of the keys to the future â€” and hopefully more success for the organization â€” is their goaltending situation. Even with the news this morning that Thomas Greiss â€” whose been a soldier for the team the last five years and is an unrestricted free agent going into next month â€” will most likely test the market, the Islesâ€™ situation in goal is as good as itâ€™s been in a long time.

Now some can argue their goaltending had reached its peak two years ago. The duo that season, Greiss and Robin Lehner, backstopped the team to a 103-point season, a first-round sweep of the Penguins and was awarded the William M. Jennings Trophy while Lehner was a Vezina Trophy finalist. Or even prior to that when Jaro Halak and Greiss manned the net a few years back. Both those situations brought good success to the Islanders, but didnâ€™t last long-term. But what they have now has the makings of being one of the best in the game, not just now but for the foreseeable future.

It begins with Semyon Varlamov and ends with Ilya Sorokin.

Varlamovâ€™s coming off a career-reviving playoff run and has solidified himself as the true No. 1 in net. After a so-so regular season, he proved a lot of his doubters wrong by backstopping the Islanders get to the Eastern Conference Finals and nearly stealing the series against Tampa. His wonderful performance also showed why Lamoriello was so keen on getting him last summer.

â€œVarly has been there for us all along,â€ were the words of teammate Cal Clutterbuck during the Tampa series. Heed the words of Andy Greene as well too.Â â€œHe fights out there and battles with us.â€

Varlamov has another three years left on his contract, but after his performance this summer, it feels like heâ€™s got a couple of good years ahead of him. Maybe not only as a starter but a mentor also to the phenom about to be described.

That phenom is Sorokin. This is where things look even brighter.

Sorokin, is the 25-year-old Russian star whom the organization finally was able to sign and get over to North America this summer. Despite not having played a game yet on this side of the pond, he is expected to be the future in goal for the franchise for what should be the next decade.

All the Islanders can do is look a few miles down the road to Manhattan and see what the Rangers have with his friend and fellow countrymen, Igor Shesterkin, for what they hope to see.

The numbers he put up in his KHL career were incredible and earned him the reputation as the â€œbest goalie not in the NHLâ€. To the Islesâ€™ fortune though, Sorokin isÂ already signed for next season and got to experience the likes of the postseason because of the time he spent with the team while they were in the bubble.

â€œFrom an organizational standpoint, heâ€™s working with our goaltending coaches all the days,â€ head coach Barry Trotz said about Sorokin last week. â€œHeâ€™s taking English lessons daily, with a tutor and learning that, and heâ€™s getting English all day and hanging out and getting the personalities. From a standpoint of integration, if youâ€™re a player coming in, there couldnâ€™t be a better situation.â€

â€œWith Ilyaâ€™s background, that could create some tension. It has created zero tension, and you find out what a terrific person he is and how heâ€™s integrated with the other players. Heâ€™s fit in seamlessly,â€ Trotz also added.

The Islanders have a lot to look forward to in the coming years. Their goaltending though, might be the most exciting out of all of it.

Their situation is in really good hands and is the best itâ€™s been in a long time.