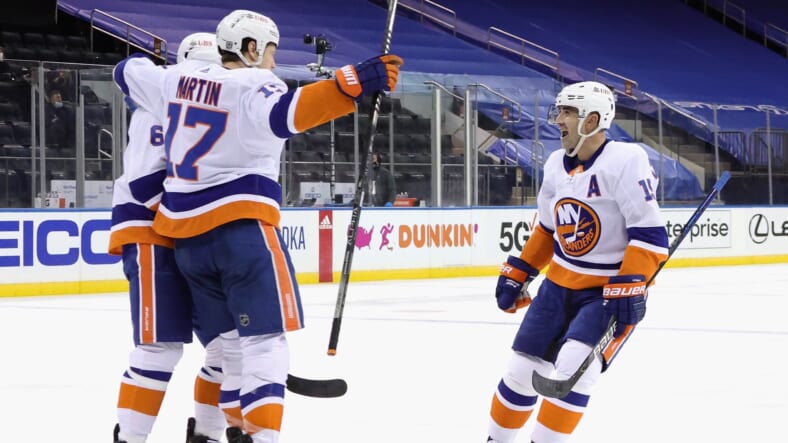 It shouldnâ€™t come as a coincidence that this little resurgence the Islanders now have had their last four games have come with their fourth line re-discovering their game.

I felt it was going to be one of the grinding lines that was going to get a goal,â€ head coach Barry Trotz said to the media after the game last night. â€œ[The Identity Line] had as complete of a game as they’ve had in a while.”

The â€œIdentity Lineâ€ coming through in the clutch isnâ€™t something new for the Islanders; theyâ€™ve been the best bottom-six line in hockey for a number of years now and were excellent in the playoffs last summer. But the trioâ€™s slow start to this season, along with the Islesâ€™ offensive struggles as a whole, had people questioning whether it was time to finally break them up. That possibility feels like itâ€™s once again off the table as it looks as if all three guys have finally come out of their slumber. And it couldnâ€™t have come at a more opportune time.

Over the past two games, Martin, Cizikas and Clutterbuck have combined for seven points. In the physical department they look rejuvenated after the mini-break from last week, allotting for 18 hits.

“The way we’re playing and gelling right now, it’s a good feeling and something that we can build off of and get better at each game,â€ Cizikas said in the postgame.

When the fourth line is going for the Islanders, it instantly makes them a tougher matchup for the opposition. The Rangers young defense saw that first hand last night on the two goals in a 2:05 span that sealed the Isles the win. And although itâ€™s just two games, there has been a clear difference in the Islanders overall play, especially from an offensive standpoint. Theyâ€™re being more aggressive and have gotten back to what has made them successful.

They can thank the fourth line finally waking up for attributing to that shift.

With 45 games left this season and that lineâ€™s future up in the air â€” the expansion draft, Cizikas being an unrestricted free agent â€” the Isles are going to need to get anything and everything from them.

Thatâ€™s been the case of late and the Islanders have been the beneficiaries of it.

If you think Semyon Varlamov is the only one who loves to play the Rangers, youâ€™d be sadly mistaken. Mathew Barzal has shown over his career he loves to shine brightly against the Blueshirts.

He didnâ€™t have the most productive game last night, but Barzal did notch his 20th point in 15 games against the boys from Broadway last night with a secondary assist on Matt Martinâ€™s third period goal.

Matt Martin. What a feed from Cal Clutterbuck! pic.twitter.com/AEaU22erhh

The assist also extended his point streak to six games and gave him his team-leading 12th point.

Michael Dal Colle and Oliver Wahlstrom had strong games again despite not finding the scoresheet. Both were battling hard for pucks and making smart plays.

Wahlstrom, who had probably his best game as a pro, tied with Casey Cizikas for the most shots for the Islanders with four.