The Islanders emphasized one thing in their drafting this year 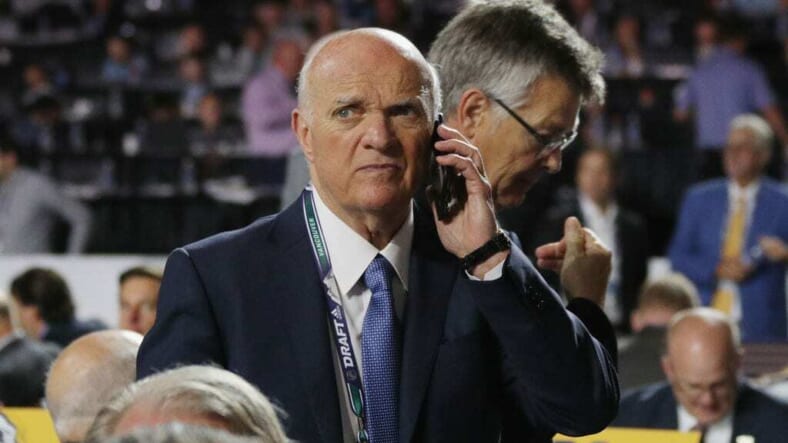 The wait was long enough for the New York Islanders to finally get in on the action of day 2 of the NHL Draft yesterday.

The Isles waited an excruciating four hours and 56 minutes before they made their first of five selections on the day at pick number 90. With that pick, they would go on to select 18-year-old Alexander Ljungkrantz (yep that last name is a handful).

Ljungkrantz, a product from Brynas Jr. of Swedenâ€™s J20 SuperElit league, was ranked the No. 66-ranked European skater by NHL Central scouting coming into the draft.

The only highlight of new #Isles pick Alexander Ljungkrantz via YouTube pic.twitter.com/gglNCQEdGm

More importantly, Ljungkrantz is a winger. By selecting him â€” and the other two forwards in the fourth and fifth rounds â€” the organization showed exactly what the emphasis was going to be as the rounds forged on, and it wasnâ€™t just picking the best players available.

It was about building up the youth on the wings.

“We’re pleased [with our 2020 Draft Class],” GM Lou Lamoriello told reporters after the draft concluded. “We drafted three forwards, all of good size and all wingers.â€

The Islandersâ€™ brass has done a better job at shoring up the winger spot the last two drafts. But it still hasnâ€™t felt like itâ€™s been enough at times.

They do have Oliver Wahlstrom, Kieffer Bellows and the aforementioned Josh Ho-Sang â€” who received yet another qualifying offer from the organization on Monday â€” but those are the only three guys who have played in the NHL recently. Behind them, Simon Holmstrom, Arnaud Durandeau, Cole Coskey, Blade Jenkins and Anatoli Golyshev are all in the system. All seemÂ like they are still a few years away from reaching the pros. Thatâ€™s why it was important the team keep adding to that position.

The Islesâ€™ current core has five wings who are age 26 and above, with three others currently being the exception â€” Anthony Beauvillier (23), Michael Dal Colle (24), Otto Koivula (20).

In todayâ€™s game which only continues to get younger and faster, thatâ€™s not going to cut it. And though the other two wingers they selected â€” Alex Jefferies at 121 and William Dufour with the 152nd pick â€” might be longer-term projects (both are also 18), it allows the organization flexibility for the future and possible options a few years from now.

â€œI complement our scouting staff at the job they did, not having a first-and-second round pick,â€ Lamoriello also said. â€œThe objective going into the draft was no different than any other draftâ€¦ Trying to get the best possible players available that will allow you to stockpile your assetsâ€¦ That’s exactly what transpired today.”

The other two picks the Isles made in the sixth and seventh rounds they used on defenseman Matias Rajaniemi and goaltender Henrik Tikkanen. Rajaniemi, stands at 6â€™4, 201 pounds and plays with the Pelicans U-20 team in Finlandâ€™s Jr. A SM-liga; Tikkanen, who comes in at a towering 6â€™8, is a member of HIFK in the same league as Rajaniemi.

Lamoriello said the 20-year-old Tikkanen was someone the team identified because of his size and improvement from last year to this past one.

The Tikkanen selection signaled the end of the day for the Isles, one that actually turned out to be balanced and quite productive despite not getting to pick in the first and second round.

Productive because they made an emphasis to making the winger position a top priority.