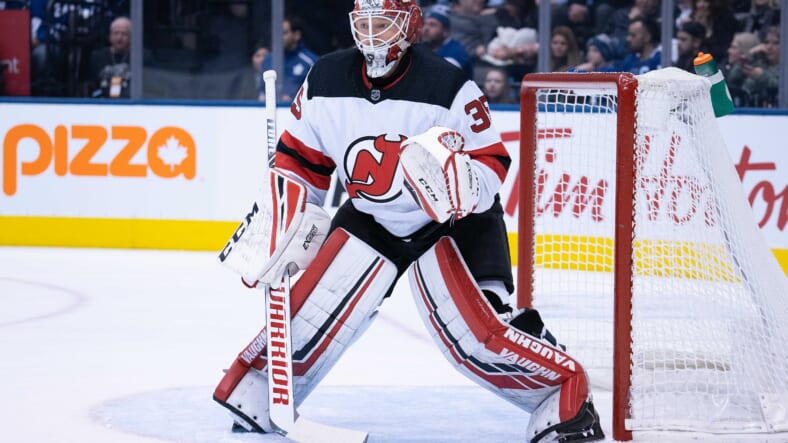 There seems to be a common theme now when people think about the New York Islanders now â€” theyâ€™veÂ turned into a goalie factory.

Cory Schneider must see it too.

Itâ€™s probably the biggest reason why Schneider, who was bought out by the New Jersey Devils last Thursday, is soon expected to be the newest member of the Isles organization. The veteran goaltender is trying to resurrect his career following a rough couple of years in New Jersey.

At one point, Schneider was one of most reliable goaltenders in the league. He helped get the Devils to the postseason in 2018 and was between the pipes for the teamâ€™s only playoff win in the last eight years. But playing behind non-competitive teams, injuries and several demotions to the AHL all played a part in his downfall and led to him becoming a free agent for the first time in his career.

â€œObviously it is up to me, you know,â€ theÂ 34-year-old Schneider said while talking with Corey Masisak of The Athletic NYC.

Choosing the Isles might have been Schneiderâ€™s only choice. As reported by TSNâ€™s Pierre LeBrun, his contract only has him making the league minimum $700K.

â€œIâ€™ve got to go there and play well. It doesnâ€™t just happen because Mitch Korn is there and theyâ€™re the Islanders. You have to go do it. If there is an environment that would be good for me as a goalie, I think that is it, so Iâ€™m excited.â€

Schneider picking Long Island, he might have made the best decision possible for a litany of reasons. For one, heâ€™ll get the opportunity to work with the best of the best.

Goaltending guru Mitch Korn and consultant Piero Greco have earned the reputation around the league as two of the best to not just turn goalies careers around but elevate them to new heights. Just look at what they did with Robin Lehner and Thomas Greiss.

Lehner, who spent the 2018-19 season with learning from those two, became a top-5 goalie in the NHL under their and was a Vezina Trophy finalist. Lehner was just awarded a brand new long-term deal with Vegas. Greiss, now with Detroit after he signed over there over weekend, had the worst year of his career in 2017-18. Working with Korn and Greco, they fixed his game and he once again became one of the top 1A-1B guys in the sport.

Some of Semyon Varlamovâ€™s success this past year too can also be contributed to Korn and Grecoâ€™s tutelage.

â€œYeah, that was obviously another draw,â€ the Schneider added. â€œThe style they play, the way they play the game. The coaching from Barry Trotz down to Mitch. I think, for a goalie, it is a great place to work on your game and just get back to basics, feel good and play well.â€

Schneider mentions the Islesâ€™ style, and heâ€™s not wrong. The structure and emphasis on defense has been their most important key to success. And even though Schneider will most likely be spending his time down in the AHL, that style resonates throughout the organization. He wonâ€™t have to worry about facing 40 shots a night like he did with the Devils.

The Islanders also provide the environment which Schneider can thrive in. Trotz and Lamoriello have instilled a family-like atmosphere and that everything is about the team. Schneider is already recognized as one of the true good guys in the NHL and was a proâ€™s pro even during his struggles in recent years. He has the exact demeanor the organization prides itself on.

We donâ€™t need to mention his relationship g.m. Lou Lamoriello and teammate Andy Greene â€” who is probably going to be back for next season â€” but Schneider being a Lou disciple only furthers why he can find success again.

Then thereâ€™s this: Winning.

Schneider wants to win. Who doesnâ€™t? The Islanders can help him do that again after her hasnâ€™t experienced much of it in past years. That success can translate into him extending his career and possibly have teams take a shot on him next offseason.

The last few years have really not gone Cory Schneiderâ€™s way. But now that has a chance to change.

Joining the Islanders allows him to do that.

Itâ€™s the perfect spot for him to resurrect his career and find his game once again.