The Islanders are â€œAll Inâ€ with their latest move 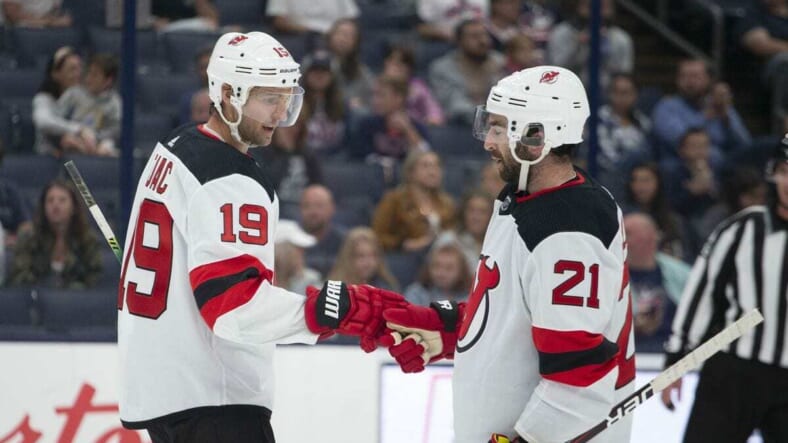 That was the feeling that took over the blue and orange cult of fans that make up Islanders Country just before 8PM last night, when news broke that the team had acquired forwards Kyle Palmieri and Travis Zajac from the New Jersey Devils in exchange for two picks â€” a 2021 first-rounder, 2022 conditional fourth-rounder â€” and minor leaguers Mason Jobst and A.J. Greer. And with that one move the Isles made their intentions clear to the rest of the division and the league for that matter: they believe they can win a Stanley Cup.

Anticipation had been building that g.m. Lou Lamoriello was going to strike sometime before the trade deadline next Monday. Even prior to captain Anders Lee going down with a season-ending injury last month, there was plenty of chatter the Isles would be buyers. Leeâ€™s setback only increased that thinking, as did his $7M cap hit which now became available for the organization to use. It seemed like something was afoot too from the outside when the organizationâ€™s top targets, Palmieri and Buffaloâ€™s Taylor Hall, were being sat out by their respective teams over the past few games. Well, Lamoriello chose what he believed to be the better package, getting a two-for-one special.

The way the team responded to [Lee’s injury] and the way they came together, certainly played a role in whatever I could do to get them some support and some help,” Lamoriello said to the media following the deal. “Certainly a first round pick is what it is. I’m extremely excited about the young players we have and how they’ve come along and how they are going to gain experience through this process. I didn’t feel uncomfortable at all making the decision, especially when you’re able to acquire the two players that we did in Kyle and Travis.”

Palmieri and Zajac both bring something different to the table that wonâ€™t only help the Islanders down the stretch but in what they hope to be another long postseason run. The 30-year-old Smithtown, Long Island native brings his goal-scoring prowess to an already well-balanced attack. As my friend and colleague James Nichols pointed out this morning, Palmieri has scored 140 goals since the 2015-16 season & is scoring at a 41-point pace in 2020-21(19 goals, 22 assists). His teammate Zajac bolsters an already formidable bottom-six, is a stout penalty killer and brings plenty of veteran and championship experience. Zajac was on the Lamoriello-led Devils squad that made it to the Stanley Cup Finals in 2012.

He also waived his full no-move clause for the trade to go down yesterday.

Thatâ€™s a testament to how the Islanders are viewed as a franchise now, one that keeps trending in the right direction and is going for it.Â “It’s a bolt of energy for sure,â€ Zajac said. â€œYou’re excited to come in this situation and coming to a team that just does things the right way. They know how to win.”

The Islanders have been in â€œwin-nowâ€ mode since Lamoriello arrived three years ago. He struck out the first time when he went for Mark Stone. Last year, he made his mark to get his club reinforcements â€” Andy Greene and J.G. Pageau â€” in the wake of devastating injuries. We all saw how those deals have played out. Theyâ€™ve been a rousing success. But this time, he made moves to make a statement. Thatâ€™s what Palmieri and Zajac are.

Lamoriello believes this group is good enough to win a Cup this year. He might not be done either.

One thing is certain, winning at all cost is the expectation now for the Isles.Â The moment was seized to get better and from here on forward this team is all-in on getting to the promise land.