Semyon Varlamovâ€™s hot start a great thing for the Islanders 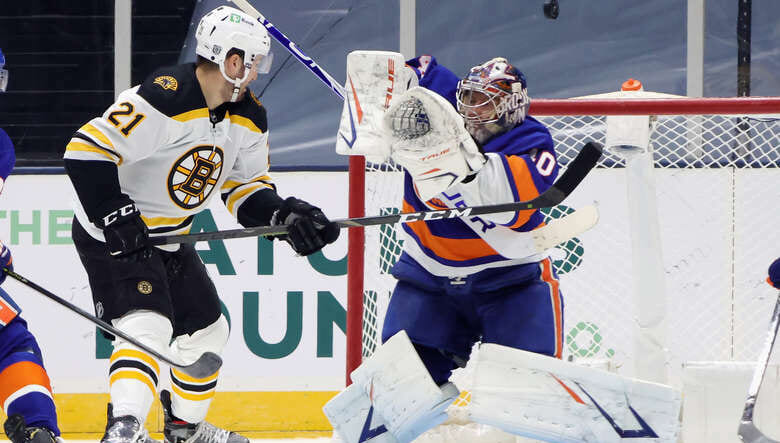 For the Islanders to have a third consecutive winning season, several things are going to have to fall in their favor. And in a compacted 56-game season such as this year, getting solid goaltending is right there at the very top. So far, thatâ€™s been what weâ€™ve seen from Semyon Varlamov.

The Islesâ€™ number one goalie has gotten off to a fantastic start to the season albeit the small hiccup on Saturday night, where he was forced to miss the game against the Rangers after taking a shot off the mask in warmups. After yesterdayâ€™s 1-0 win over the Bruins, heâ€™s now 2-0-0 to begin this year and hasnâ€™t allowed a single goal in both of his starts.

Heâ€™s also now the only goaltender in franchise history to start a season with two straight goose eggs.

â€œI just think heâ€™s really calm, thatâ€™s the No. 1 thing,â€ head coach Barry Trotz told reporters after the win. â€œI just thought early on he was a big reason why we got a win â€” he made some really good saves against a really good team. He just calmed our game.â€

Big save by Varlamov on Ritchie #Isles pic.twitter.com/b5jUiyc6Wr

A lot of people had question marks as to whether or not Varlamov would emulate his play from the postseason, when he was outstanding and close to a fortress as possible. Three games in, heâ€™s proven that performance was no fluke.

Per NYIHockeyNowâ€™s Andrew Battifarano, Varlamov has allowed just three goals over his last four starts going back to the bubble. That amounts to 133 saves on 136 shots against.

This type of success early on from Varlamov could prove crucial as the season progresses on. The Isles are most likely going to be in a dogfight for one of the four playoff spots in the East division. So having quality goaltending from your presumed starter helps tenfold. And because Trotzâ€™s clubâ€™s the last two seasons have been built on stable defense, and even more importantly, goaltending, it has greater significance.

Varlamov wasnâ€™t the established starter in the regular season last year, having shared the goaltending duties with Thomas Greiss. Now Varlamov is top billing and it looks like heâ€™s determined not to let it go.

â€œThat’s the best result after two games that I’ve ever had,” Varlamov said. “I’ve never gotten back-to-back shutouts in the beginning of the season. I had some seasons were I felt great, but still the outcome was different. I’m pretty happy about the results.”

Ilya Sorokin was and is the hot shot goaltending prospect the organization finally got able to come over in the offseason. And while he did get shelled in his first NHL game on Saturday â€” a 5-0 blowout loss to the Rangers â€” Sorokin is still green and needs to be eased in. Thatâ€™s where Varlamovâ€™s hot start may also be a blessing in disguise as it takes the pressure off him.

Itâ€™s still early but Semyon Varlamov looks like heâ€™s in the zone. His start to the season has been very encouraging.

Last nightâ€™s win marked the first time since November 2013 the Islanders defeated Boston on home ice. It wasnâ€™t an underlying storyline going into the game, but it could prove huge going forward.

Said Ryan Pulock: “It seems like every time we play them it’s pretty tight. They play a structured game, a heavy game, kind of playoff hockey and we like to play that we too.”

The Isles will square off with the Bâ€™s another seven times in the next 53 games and they might all have the same style as what the two teams showed.

The Islanders penalty kill has been sensational to begin the year. Theyâ€™ve allowed just one power play goal in 14 attempts. A lot of that improvement has resulted from J.G. Pageau and Anthony Beauvillier playing a role.

Pageau has also done it in the faceoff circle and finally got his first goal of the year which was the game-winner.

To take a quote from the legendary Clu Haywood of Major League: â€œBoy, you really knocked the crap out of that one!â€