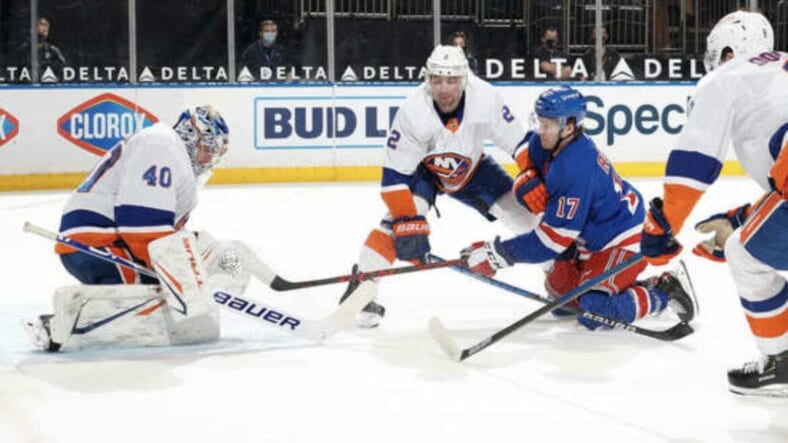 Maybe we should have expected this. Maybe this is just how the Islanders have continued to have an edge in a rivalry that in reality has been one-sided for close to half-a-decade outside of last season. What is this in reference to? Itâ€™s Semyon Varlamov continuing his dominance of the Rangers.

The Islanders came into last nightâ€™s tilt against the Rangers needing a big time performance from everyone in the lineup, and they received it, shutting out (and I use that term literally) the Blueshirts 3-0 and moving within one win of a third consecutive playoff berth. The man who backstopped the victory, Varlamov, was once again perfect, turning away all 25 shots he faced for his league-leading and new career-high sixth shutout. Varlamovâ€™s goose egg also marked his third against the Rangers this season, all at Madison Square Garden, making him the first goalie â€” not only in franchise history but NHL history â€” to put up three shutouts at MSG in a season, that according to Isles maestro statistician Eric Hornick.

â€œItâ€™s always fun to play in front of Rangers and and Isles fans,â€ said Varlamov in the postgame. â€œThereâ€™s a lot of Islandersâ€™ fans that come here and support us. Every time I play, I try to have fun.â€

Well keeping on that quote, the 33-year-old has had buckets of fun when the Rangers have been the opposition this season. Varlamov after last night is 4-1-0 with a 0.81 GAA in five starts against that vaunted Blueshirts offense, with the only defeat coming on Coliseum ice earlier this month. He clearly owns the Rangers and heâ€™s not the only Isles goalie to do so in recent seasons.

Before Varlamov made his way to Long Island two summers ago, the Isles were blessed with another netminder who was the Blueshirtsâ€™ kryptonite, Jaroslav Halak. In his four seasons with the Islanders, Halak went 11-3-0 in 14 starts against those guys from Seventh Avenue. Â Most of the time too, those wins came against the Rangersâ€™ all-world goalie in Henrik Lundqvist. Halak loved to play and beat the Rangers, which has continued with Varlamov and will also hopefully translate to rookie Ilya Sorokin.

Sorokin has only faced the Rangers twice this year but will more than likely see a heavy dose of them over the next several years.

Back to Varlamov though. He was already having a stellar season without all the excellent showings against the Rangers. His play took a small step back from being Vezina-worthy early on, but even so, Varlamov has left no doubt he is clearly the Islandersâ€™ number-one in net going into the postseason.

The Islanders clinched the season series against the Rangers again for the fifth time in the last seven seasons with last nightâ€™s win. A lot of it can be credited to Varlamov and his dominant play. That dynamic shouldnâ€™t be all that surprising.

Heâ€™s continued the trend of Islander goalies having their way with the Blueshirts.

If Varlamovâ€™s stats against the Rangers arenâ€™t corky enough, try the one that came out about Leo Komarov last night. In the three years Komarov has been an Islander, the team is undefeated when he scores in the game.

The Islanders have literally never lost when Leo scores (13-0-0, including playoffs). pic.twitter.com/O754mEmkGM

Komarov notched the game-winner early on in the first period off a great cross-ice feed from Jordan Eberle. His celly too was fantastic.

No one could have used a goal the way Oliver Wahlstrom did last night. His wicked snipe on the power play was his first since March 25th in Boston.

Wahlstromâ€™s confidence looked like it had returned after a tough stretch that saw him called out for his play and led to a few healthy scratches.