Scott Mayfield made huge strides in the playoffs for the Islanders 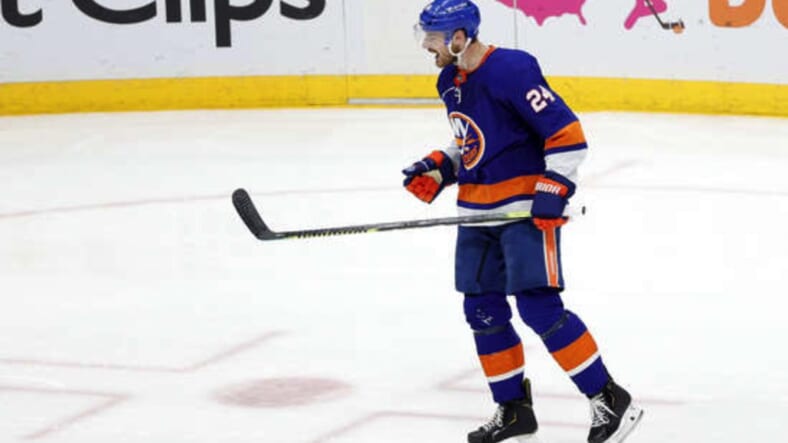 At one point during these past playoffs for the Islanders, a lot of the talk was about d-man Scott Mayfield. Now just six days since the team’s postseason run ended, the talk is still about him.

With the expansion draft coming in a few weeks, the Isles have some tough decisions ahead of them to keep the core intact after they reached a second consecutive Eastern Conference final. One of those difficult determinations will be to protect or expose Mayfield, who is the type of player — still considered young at 28-years-old and with a bargain of a contract — that might be a very viable option for the expansion Seattle Kraken.

No one would fault Seattle g.m. Ron Francis if he plucked Mayfield away from the Island especially after the outstanding postseason he just had.

“Mayfield has been a key part of this team for the past few years in the shutdown role that he plays,â€ said teammate Ryan Pulock during the series with Tampa Bay.

Pulock isn’t just blowing smoke either — Mayfield was a tour de force for the Islanders from the moment the playoffs began.

His performance in the first round against the Penguins — at one point during that series he was leading the team in points — was an underlying factor in the Isles advancing to the second round. Against Boston, Mayfield threw his weight around and helped shut down Taylor Hall, whom the Islanders decided to pass up on at the deadline and was supposed to help edge the series in the Bruins’ favor. Then versus Tampa, he did commendable work on the penalty kill and scored the tying goal in Game 6 to help the Isles force overtime.

THIS GAME IS TIED!#GoBolts | #Isles

Mayfield ended the postseason with a +12 rating in 19 games, which was the best among the team. Some look at plus-minus as a useless stat, but that number proves the rangy d-man was on the ice for way for when the Isles were at their best.

“I think personally I had a pretty good playoffs,” Mayfield said during the club’s exit meetings on Sunday. “The biggest thing for me is that we’re not happy losing in the semifinals. I’m definitely happy with the way I played and the team played. But we wanted more.”

Mayfield’s strong play might have also saved his spot for the future as an Islander. The regular season wasn’t a good one for him in particular, as he struggled to find chemistry with Nick Leddy on the team’s second d-pair. The metrics for that duo during the 56-game sprint was a concern going into the playoffs and many thought it would be a reason the Isles wouldn’t go far.

That was not nearly the case.

The Islanders got as far as they did because of players like Mayfield stepping up, among many other things.

Leddy on the other hand struggled and looked worn down. Not saying that could play a factor in whether g.m. Lou Lamoriello protects Mayfield over Leddy, but it should be taken into consideration when the team’s list is made.

If Mayfield does remain in blue and orange a few weeks from today, this postseason will be huge momentum wise for him going into next season. The strides he made were definitely unexpected but proved he was a critical piece of the Islanders’ overall success.