Scott Mayfield has made big strides this postseason for the Islanders 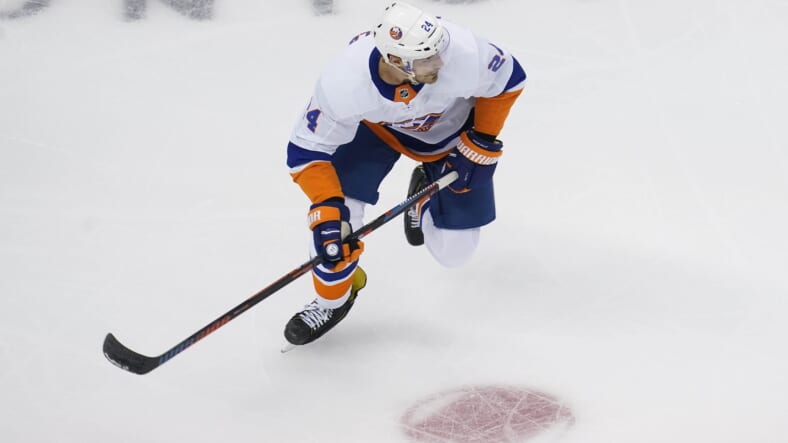 Sep 5, 2020; Toronto, Ontario, CAN; New York Islanders defenseman Scott Mayfield (24) during the first period in game seven of the second round of the 2020 Stanley Cup Playoffs against the Philadelphia Flyers at Scotiabank Arena. Mandatory Credit: John E. Sokolowski-USA TODAY Sports

There’s been a lot to be excited about as the New York Islanders during their run in the playoffs. That includes the progression from one player who has been a big part of the steadfast defensive core they’ve built in recent years, Scott Mayfield.

Mayfield, despite a few setbacks (or broken sticks to be specific), has made some big strides since the Isles have started bubble play at both ends of the ice.

In 21 games, Mayfield has recorded five points and is a +13 overall, which is the best on the team. Three of those five points too came at the tail end of the previous series against the Flyers. He’s totaled 23 shots, showing he hasn’t been afraid to try and get in on the offense.

Mayfield’s lone goal in the playoffs — the game-winner in game seven against Philadelphia — was a beautiful wrister and a shooters shot.

From a defensive standpoint, Mayfield looks a lot more comfortable. As opposed to his defensive partner Devon Toews — who was very solid through the first half of the team’s run but has struggled a bit as of late — Mayfield’s been sharper in his own zone and used his size and physicality to his advantage.

His hits (46) and blocks (45) are right at the top for the club, according to quanthockey.com. Mayfield’s also done a terrific job on the penalty kill as a part of the first unit with Adam Pelech, Cal Clutterbuck and J.G. Pageau. They’ve been responsible for helping the team only allow 12 goals on 76 opportunities shorthanded.

Has Mayfield too had his moments where he’s had trouble? Yes. But that comes with the territory when a team gets as far as the Islanders have.

What a freaking shift from Scott Mayfield on the penalty kill, without a stick pic.twitter.com/ztBISUcc9j

It’s interesting that it’s turned out that way too because before the regular season paused back in March, the 27-year-old Mayfield looked as if he had taken a step back.

When Pelech went down in early January with an Achillies injury, it left a huge void and it really allowed things to get discombobulated for Mayfield and the d-corps as a whole. During that period, Mayfield was missing assignments and he stopped playing with a physical mindset. He looked as if he was trying not to make a mistake instead of being more loose and confident with and without the puck.

Those struggles from Mayfield feels like they were years ago as compared to just seven or eight months ago. Now, he looks again like the solid defender who was one of the biggest suprises from the season prior and the steady presence whom head coach Barry Trotz came to trust in important situations.

As the Islanders get set for another do-or-die Game Six tonight against the Lightning, they are going to need all hands on deck. They are going to get Tampa’s best game, with or without their star forward Brayden Point.

That means getting a strong showing from the likes of Mayfield as he’s done for a while now. He’s been one of the exciting developments from this run. And the strides he’s made have been great to see.