Re-energized Andrew Ladd Providing a Boost for the Islanders 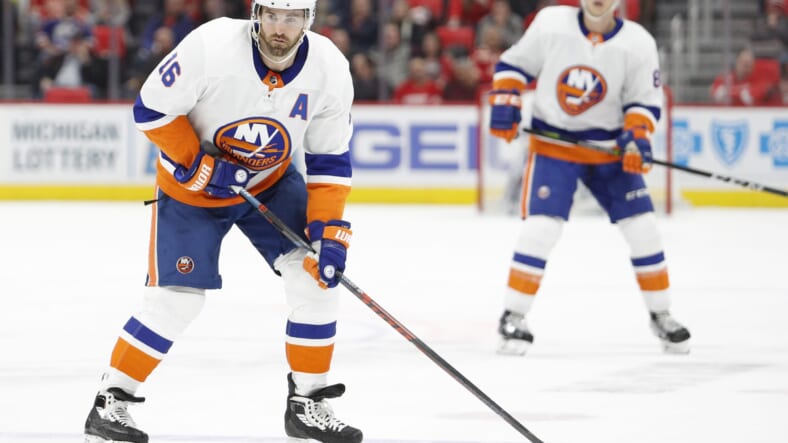 Barry Trotz had a simple explanation for why he made the decision to go with Andrew Ladd to possibly extend the shootout last night for the New York Islanders.

â€œHis career totals,â€ the Islesâ€™ head coach said after the game last night. â€œHeâ€™s the highest that we have on our team.â€

Ladd was unsuccessful in his attempt â€” missing the net as Canucks goalie Thatcher Demko went with the old school two-pad stack â€” and with that, the Islanders lost 5-4 for their seventh straight loss (0-3-4).

Despite another tough setback, the Isles played their best game in a long time. They peppered Demko, the Canucksâ€™ rookie goaltender, with 49 total shots and found the back of the net four times. One of those four came from Ladd, who opened the scoring with his first goal of the season and first tally since back in October 2018.

It was another instance of the boost heâ€™s given the team since he got back into the lineup last Saturday.

Itâ€™s great to see Ladd making an impact for an Isles team who is in the thick of the chase for the postseason. He had to spend a majority of this season in Bridgeport after not making the team out of camp and still having to rehab from a torn ACL he suffered in a game last March.

â€œItâ€™s fun to be back in that room and contributing,â€ said Ladd to The Athleticâ€™s Arthur Staple. â€œIf we play like that every night weâ€™ll get the result. We liked our game against Carolina (on Saturday), just trying to get back to that pressure all over the ice that makes us successful.â€

Ladd’s veteran leadership might have been just what the Islanders needed having been without Casey Cizikas, and most recently Johnny Boychuk. The 34-year-old knows how to win at this time of the year; he’s got two Stanley Cup rings to prove it.

Last night’s loss in Vancouver was just the B.C. native’s fourth game all year, but Ladd’s strong performance was another case of him showing his teammates how to overcome adversity. It was also a message to the younger guys on this club that they need to fight for every inch at this time of the year.

There’s still another 14 games left for the Islanders to secure their second straight postseason appearance. Right now they are below the cut line, one point behind both the Carolina Hurricanes and Columbus Blue Jackets for both wild card spots. So the intensity in these last few weeks is only going to get ratcheted up more. The Isles are going to need Ladd’s hard mentality and his championship pedigree to shine through.

He’s given the Islanders what they needed and they need it to continue hopefully into the playoffs.