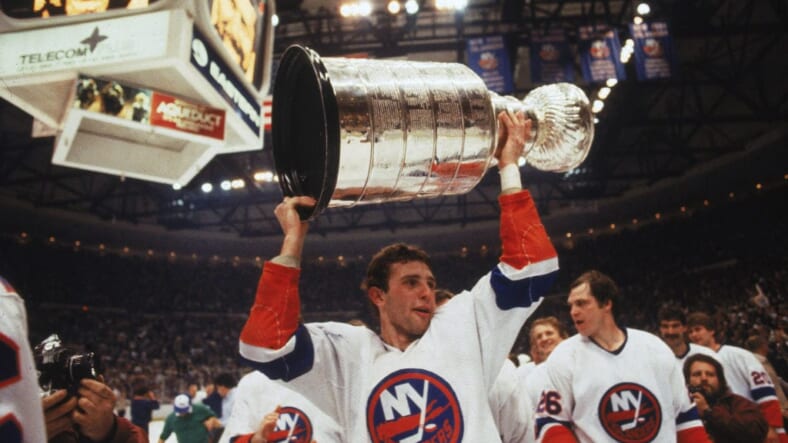 UNIONDALE, NY – MAY 17: Brent Sutter #21 of the New York Islanders hoists the Stanley Cup over his head after the Islanders defeated the Edmonton Oilers for the NHL championship on May 17, 1983 at the Nassau Coliseum in Uniondale, New York. (Photo by Bruce Bennett Studios via Getty Images Studios/Getty Images)

Last night brought the riveting conclusion to “The Last Dance”, the ten-part documentary that circled around the Chicago Buils’ 1997-98 championship season and the end of Michael Jordan’s career in Chicago.

The way in which the story was told was masterful, which got me thinking: The ’83-’84 Islanders would have made for a compelling documentary.

Now, it’s obvious that hockey doesn’t have the same appeal in the United States — or the world for that matter — the way basketball does, but the Isles were the last North American sports franchise to win four championships in a row and 19 straight playoff series, a mark still not matched till this day. And yes, that team did not have the greatest player of all time. That was Wayne Gretzky, who they beat the year before; Gretzky returned the favor, which will get to in a minute. 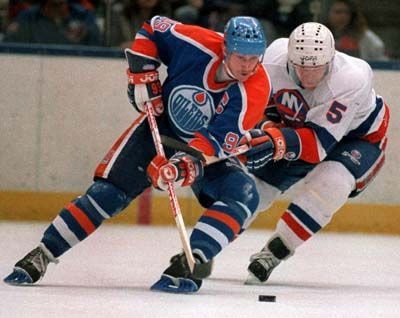 Telling the story of the franchise’s rise from being called hapless up until their final stand going for a fifth consecutive title, almost similar to the meteoric rise of Jordan’s Bulls, would make for some fantastic stories and inform a whole new generation about one of the greatest dynasties ever assembled (I’m looking at you Stan Fischler!).

By the time that 83-84 season rolled around, the Islanders were the defending four-time Stanley Cup winners. They had a number of future Hall of Famers — Denis Potvin, Mike Bossy, Bryan Trottier, Billy Smith, Clark Gillies –Â  and a memorable supporting cast who had poured their blood and sweat the past seven-plus years to help bring the franchise immeasurable success. They had arguably the best head coach-general manager duo in the history of hockey and maybe sports for that matter,Â  the late Al Arbour and Bill Torrey. Add to that, they also had their next crop to hopefully keep their reign over the NHL going in 18-year-old Pat LaFontaine, 20-year-old Patrick Flatley, and 23-year-old Kelly Hrudey.

That Islander squad once again dominated in the regular season, going 50-26-4, winning the Patrick Division for the fifth time in seven years. Injuries and fatigue from their drive began to make its way through the cracks during the season though. Bossy was limited to 67 games that year, yet he still totaled an absurd 118 points. Trottier appeared in only 68 games. Reliable d-man Gord Lane had been limited to 37 games while bottom-six presence Wayne Merrick only suited up for 31 games.

Once they got to the postseason, just as they did time and time again, the islanders turned on that switch.

They were tested to the very end in the first round against their fierce crosstown rival the New York Rangers. But their championship pedigree rose up again when Ken Morrow scored the game-winning goal in the deciding game five to keep the dynasty alive. In the second round, they made quick work of the Washington Capitals in five games. This set up a showdown with the up-and-coming Montreal Canadiens, who boasted a young, hungry squad with Bob Gainey, Guy Carbonneau, Mats Naslund, Claude Lemieux, and also featured legends Guy LaFleur, Steve Shutt and Larry Robinson.

Montreal looked like they were going to be the ones to bring the Isles’ dynasty to its knees after they won the first two games of the series. Think again. The Islanders won the next four straight games all by two or more goals each time to secure their 19th straight playoff series win and clinch their fifth and final Stanley Cup Finals berth.

Waiting for them in the Finals was the team they had humbled the year before — and who they’d swept — the Edmonton Oilers.

This time around, the Oilers, powered by Gretzky and a cast of future Hall of Famers, took no chances and beat the Islanders in five, ending the Isles’ historic run.

Similar to the ’90s Bulls, things were never the same after that last run for the franchise. The cornerstones of the dynasty began to fade or were sent elsewhere. LaFontaine, Flatley and Hrudey became excellent pieces in their own right, but the magic just wasn’t all there. The franchise itself also experienced a myriad of problems over a number of years which still are being felt today.

That 1983-84 Islanders club was the last of its kind. Sure, there’s been other dynasties since — those mentioned Bulls teams, the late ’90s Yankees, early 2000s Lakers, the Brady-Belichick led Patriots; none of those teams though won four straight and 19 consecutive titles to get there.

The Islanders had a documentary made about them in 2013 –Â ESPN’s 30 for 30 Big Shot — which was directed by actor Kevin Connolly. That doc told the story of the fraudulent attempt of con-businessman John Spano to by the team in the late ’90s. If the franchise were going for redemption as Jordan loved to say, their last run as a dynasty deserves to be in the spotlight.