One quirky but important part the Islanders game five win 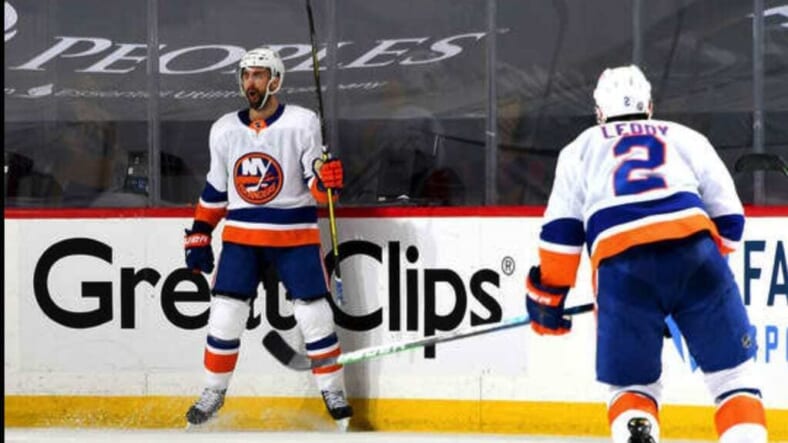 When historians look back on the Islanders’ incredible game five win over the Pittsburgh Penguins, they will be quick to point out the turning points that shifted the contest. Most of them will probably be the ten-bell stops by goalie Ilya Sorokin.

But there’s another moment that can’t go unnoticed.

Jordan Eberle’s goal midway through the third period not only was the Isles to first shot on net of the period but helped them tie the game and eventually set forth the battle that would take place the rest of regulation and in overtime.

“Once we scored that [third period] goal [from Eberle], I felt pretty good about our team,” head coach Bary Trotz said following the win. “It was one of those nights, where when we got it tied up and it went to overtime I was thinking that this was going to be our night.”

Eberle’s goal Monday night was his second of the series; he scored the Islanders’ fourth goal on Saturday in their 4-1 win in game four. Last night’s game-tying tally also marked sixth against the Penguins in the postseason dating back to 2019. Oddly enough, that little stat means a little more this morning.
The Islanders are a perfect 6-0 against Pittsburgh in the playoffs when Eberle records a goal. They are 1-2 when he doesn’t. Four of those victories came when the Isles swept those same Pens two years ago in the first round.

“Ebs scored a big one. A nice big shot and buried it,” J.G. Pageau said in the postgame which drew a bit of smirk from Eberle knowing he had fanned on his first attempt but converted on the second.
Eberle had a slow start to the series the first three games, as did his linemate Mathew Barzal. In the last couple game though, he’s really come on strong and has played a key role in the Islanders having a chance to move on to round two with a win tomorrow night. His two tallies in this series have been extremely crucial, last night being the bigger of the two.
The Islanders seem to come out on the better side of things when Eberle finds the back of the net, especially when the opponent is has a penguin on its sweater. With the potential to clinch the series, he scoring tomorrow night could very well put the nail in Pittsburgh’s coffin.
—
Josh Bailey’s game-winning goal last night was his second in his Islander career. But as usual, he was calm, cool and collected when asked about how big a goal it was for him by reporters after a game. Leave it to his wife Megan to elicit the emotion we had hoped to get out of him. FYI, it was a great celebration.

Josh Bailey’s wife Megan’s reaction to his winner is EVERYTHING #Isles pic.twitter.com/Vk4DxfKDDH

—
Hats off to Ilya Sorokin for his miraculous performance in game five. The rookie netminder was the only reason up until overtime the Islanders had even the slightest chance of winning. His performance was reminiscent of another Islanders’ goaltender in a pivotal postseason game, Thomas Greiss.
Back in 2016, Greiss turned away 47 of 48 Panthers shots — including a huge penalty shot save in OT against Aleksander Barkov — in the Isles’ game five OT win in that first-round series.
Sorokin last night stopped 48 of the 50 shots the Penguins threw his way, 19 of which came in the second period when the Islanders were outshot mercifully 20-4.