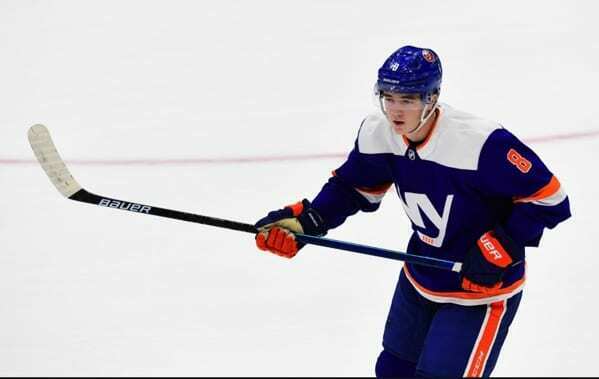 When the puck drops on the Penguins and Islanders opening-round series either Sunday or Monday — more likely Sunday — who the spotlight will be shining on for both teams should be pretty easy to tell. The usual suspects, Sidney Crosby, Mathew Barzal, Kris Letang and Semyon Varlamov, are all going to be talked about ad nauseam. A few other Isles might get some extra rub as well.Â One of them who might not receive any such notoriety but should be watched closely is Noah Dobson.

Dobson, the 12th overall pick in 2018, is entering his second postseason with the Islanders.

The 21-year-old was with the Isles for their run to the Eastern Conference finals in the bubble last summer, despite only playing one time. Dobson’s lone appearance came in game six of the third round against Tampa Bay, where he replaced Adam Pelech who had broken his wrist in the previous game. The Isles were eliminated that night in overtime on an Anthony Cirelli goal, but Dobson didn’t look at all fazed by the bright lights of the postseason.

This go-around will be a little different for Dobson. Unless head coach Barry Trotz goes with the veteran experience — which he’s known to favor from time to time — and plays Braydon Coburn (highly doubtful), Dobson should be a regular in the lineup against the Pens. In the regular season, he was the everyday fifth d-man in the Islanders’ rotation on the backend playing opposite Andy Greene, and he was an important cog in the team’s engine. Before his stint on the NHL COVID-protocol list from mid-March till early April, the d-man was having a solid sophomore campaign. When he came back, it was hard for Dobson to re-adjust to the pace and speed of the game.

All in all, this will be the youngster’s first real big challenge of his career.

This defensive play from Noah Dobson in the final seconds to prevent a scoring chance pic.twitter.com/Cml4clGzhk

Dobson does know a thing or two about rising to the occasion in the postseason. He played a big role in winning back-to-back Memorial Cups in juniors. That’s a pretty good trait to have. But compared to the Stanley Cup Playoffs, junior playoff hockey is child’s play. The intensity and grind the games can have on the players is turned up another dial. But there’s another aspect to remember in regards to why to keen in on him.

The Islanders traded Devon Toews in the offseason with the idea that Dobson could be the air apparent to him not just in the regular season but the playoffs too. Toews was solid in for the Isles in the bubble, so if Dobson can repeat or outshine how he performed, it will justify a lot of the belief that Trotz and g.m. and Lou Lamoriello had when they spoke about him.

“We would not have made this move certainly if the ice time that Devon received, we didn’t have the ability to put a player into that, andÂ Noah Dobson will certainly, we feel is ready to take the next step,” Lamoriello said back in October.

Well, that next step has arrived for Dobson. The playoffs could well end up being his coming-out party. There’s no doubt he’s going to have his hands full with the sneaky attack Pittsburgh is armed with. Who knows, maybe he pulls an Adam Pelech/Ryan Pulock from two playoffs ago?

One thing for sure, we will know a lot more about the one they call “Dobber” very soon. The spotlight is definitely on him among many others in this series for the Islanders.