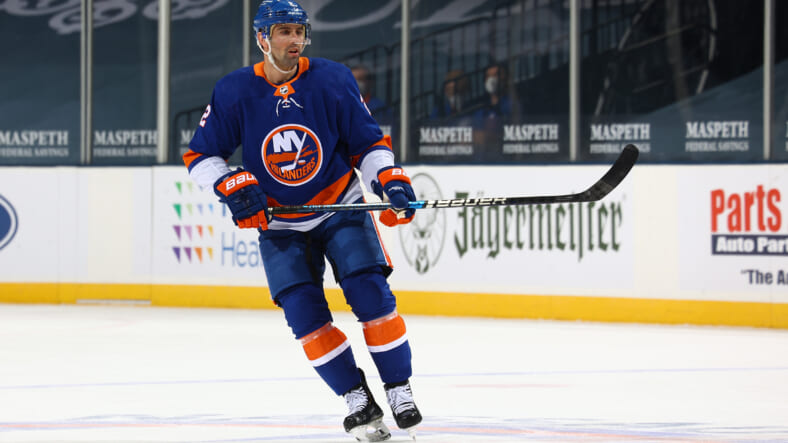 There have been quite a few surprises weâ€™ve seen take place when it comes to the play of certain players from the Islanders this season. The one that maybe might be the most is the rebirth of Nick Leddy as an offensive threat once again.

At this juncture of the season, Leddy has been far and away the Islesâ€™ most consistent d-man from an offensive perspective.

Leddy is currently riding a five-game point streak and his 15 points in 22 games leads all defensemen in that category. Heâ€™s notched a team-best 14 assists â€” the most recent coming in last nightâ€™s win in New Jersey â€” which is three more than second-best Mathew Barzalâ€™s 11. On top of that, heâ€™s shooting the puck a lot more. His 33 shots through 22 games are the fourth-most of any defenseman.

Mathew Barzal blows by everyone and scores. Beautiful. #Isles pic.twitter.com/L1peNV5XZN

Those numbers were definitely not what people were expecting after all the changes surrounding Leddy that took place in the few months prior to now and because of his low production in the past two seasons. Leddy produced career lows of 21 and 26 points the last two years and heading into this year, he was going to be without his longtime d-partner Johnny Boychuk, who was forced to end his career in November due to an eye injury. There was also having to take on a bit more responsibility after the organization dealt their most skilled d-man offensively â€” Devon Toews â€” back in October. Head coach Barry Trotz paired him with Scott Mayfield, more known for his defensive prowess, to round out his top-four on D.

All of these adjustments might have taken their toll on Leddy, but he hasnâ€™t shown at it at all. In fact, heâ€™s looked even more confident and determined, even with the few hiccups he and Mayfield have had. But its been the offense that’s been the sticking point.

“We need that with the movement of Devon,” Trotz said of Leddy earlier this week. “We asked Nick to jump in there and do that. The biggest thing with Nick is his skating. Heâ€™s known more as a transporter than a playmaker, but his confidence is growing. This game is too hard to score just with your forwards. You need your defense involved at the right time. I like what Nick has done so far this year.”

Leddy’s excellent season thus far brings back shades of when the 29-year-old arrived on Long Island in 2014. He had earned a good reputation for his offensive mindset and impeccable skating during his years in Chicago, but It was clear from the start of that year: he was better than advertised. Leddy tallied 37 points (10 goals, 27 assists) that year and then followed it up with three consecutive 40-plus point years.

Now it’s as though that side of Leddy has returned, and it couldn’t have come at a better time for the Isles. Not only because they’re hot right now and are tied in points with Washington in points for first place in the East Division, but because the club has needed another offensive-producing blueliner to go with No. 1 d-man, Ryan Pulock.

Earlier this season, Islanders g.m. Lou Lamoriello said Leddy looked the best since he came on the scene three years ago. Leddy has proven his boss’s words are ringing true.

A lot of it is a result of him finding his groove offensively, which has been on display now all season long.

Oliver Wahlstrom is quickly becoming what the Islanders had hoped for when he made the team this year. The 20-year-old rookie scored again last night with the goal being one of the most impressive from any player on the team all season. His snipe over the shoulder of Devils’ goaltender Aaron Dell sent shockwaves at just how much confidence he’s playing with at the moment.

The kid is on absolute fire with goals in back-to-back games and six points in his last five contests.