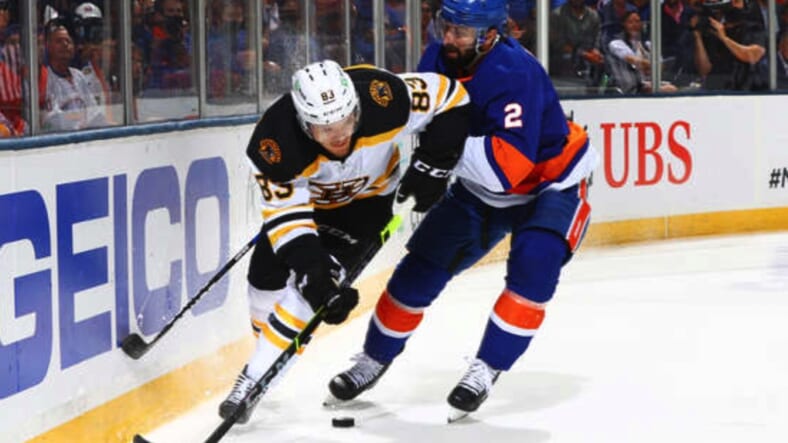 Everything about the Islanders’ series-clinching win over the Boston Bruins last night was perfect. From the charged-up atmosphere to how the game unfolded with the Islanders dominating the opposition at every turn.

And then there was d-man Nick Leddy’s game, which was perfect as well.

Leddy, who has yet to have a solid showing in the postseason thus far, was tremendous and made some very big defensive plays throughout the contest. He recorded an assist, 20:31 of ice time and three blocked shots.

What a sequence for Nick Leddy. Best he’s looked all postseason. pic.twitter.com/MkFjmo1cIj

This postseason up until Wednesday night had been a far cry from how the 30-year-old Leddy performed in the regular season. In the 56-game sprint, the defender registered 31 points — which was the most for an Islanders’ defenseman — all with having to adjust to pairing with a new defensive partner in Scott Mayfield. He and Mayfield’s optics weren’t pretty during the season, but both had still been quite effective going into the playoffs.

Once the first round against Pittsburgh began, something seemed off about the way Leddy looked. He wasn’t using his patented speed. He wasn’t being hard on the puck or the opposition. And he just looked worn down. That looked to be the case at points in this past series as well, especially when Charlie Coyle posterized him at the beginning of Game 5. There’s speculation — and there probably will still be until the Isles’ season is over — that something was ailing him.

But then you got a vintage Leddy performance last night. And you see again why he is one of those guys that has long been one of the most underrated pieces the Islanders have had the past five-plus years.

Heading into another heavy matchup against the Tampa Bay Lightning, Leddy’s speed and offensive ability will be crucial. Tampa rolls four lines just like the Islanders, plus they have some real game breakers in Nikita Kucherov and Brayden Point. Then again, now that he’s gotÂ a truly good outing this postseason under his belt, maybe that confidence and swagger starts to show up again in Leddy’s game.

The Islanders and their fans were waiting for Leddy to finally make an impact this postseason. It finally came last night in the perfect spot in a perfect performance all around.

This second round series had a lot of dynamics that ended up favoring the Islanders. No more was that the case then how their trade deadline acquisitions panned out as opposed to the Bruins. Kyle Palmieri and Travis Zajac combined for seven points for the Isles in six games, including Palmieri scoring in three consecutive games. Taylor Hall on the other hand had just two points, one of them being an empty net goal in game one.

KYLE PALMIERI DOES IT AGAIN! pic.twitter.com/ISiAMGfH5Q

Isles fans had clamored for g.m. Lou Lamoriello to trade for Hall when captain Anders Lee went down in March. But in the moment, Lamoriello made the right choice and the Islanders have become an even more dangerous squad because of it.