New York Islanders: “What If” Rick DiPietro had stayed healthy? 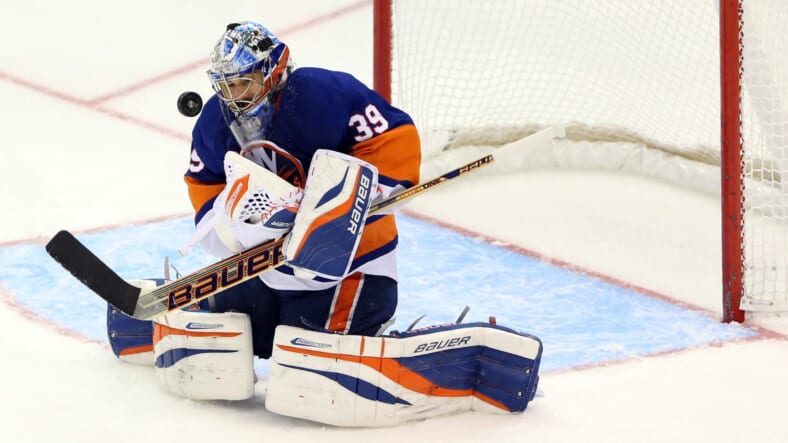 For a franchise enriched with a good amount of success, the New York Islanders are still one of the more prone “what if” teams in professional sports.

So when CBS put out their tweet yesterday, it got me thinking about one guy: Rick DiPietro.

Before he became one-third of the popular midday radio show, DiPietro, Canty and Rothenberg, DiPietro was a goalie for the Islanders for 13 years. The 38-year-old Maine native was a pretty solid one too before injuries ravaged his body.

The Isles drafted DiPietro out of Boston University with the number one pick of the 2000 NHL Entry Draft. DiPietro became just the fourth American player ever to be drafted first overall. Mike Milbury, the team’s general manager at the time, dealt future Hall of Fame goalie Roberto Luongo — whom he drafted three years earlier — to Florida to make room for him. It’s still talked about as one of the worst and most controversial moves in franchise history. But that’s a conversation for another day.

DiPietro’s first two NHL seasons were nothing to write home about, just five wins in 30 games. It wasn’t until 2003-04 where he was slotted as the starter in goal and fans got their true first look at the organization’s possible answer in net for the next five to ten years.

That season, DiPietro saw action in 50 games and went 23-18-5 with a .911 save percentage. His strong rookie campaign helped propel the Islanders into the postseason, where they were eliminated in five games in the first round by the eventual Stanley Cup winners, the Tampa Bay Lightning.

After being ousted in that series, the NHL went through a work stoppage that costed the league the entire ’04-’05 season. When play resumed in 2005-06, DiPietro quickly established himself as one of the top up-and-coming netminders in the sport; DiPietro would record 30 wins, a new career-high, and set a new career-best for games played with 63.

New general manager and his former backup, Garth Snow, rewarded DiPietro for his solid season, extending him to a 15-year, $67.5 million contract. The deal itself was ludicrous at the time and still is today, even though the team bought DiPietro out in 2013.

The first year of that mega-deal was the most notable of DiPietro’s career. His name was in the Vezina Trophy conversation that season after he went 32-19-9 and helped the Islanders get back to the playoffs. Unfortunately, it was also the year DiPietro would truly peak and where his downslide began.

In the thick of the playoff chase in early March, DiPietro suffered the first of several injuries to come, when he was concussed after a collision with a Montreal Canadiens player. Another concussion followed a short time after that. DiPietro would return for the playoffs and play in games two through five of the Islanders’ series loss to Buffalo. After the season ended, he had surgery to fix a torn labrum in his hip.

DiPietro was healthy enough to play another 63 games in 2007-08, and he even was selected for his one and only All-Star appearance. During All-Star Weekend, DiPietro would end up getting hurt during the skills competition. He continued to play despite the injury until the Isles shut him down for the rest of the year once they were eliminated from playoff contention.

The next few years saw the demise of DiPietro. He never returned to full health and played in only 50 games from 2008 to 2013. The Islanders finally let him go in 2013. DiPietro would catch on with the Charlotte Checkers, the Carolina Hurricanes AHL affiliate. There he played in five games in the 2013-14 season before he was cut in late November which led to his retirement.

DiPietro’s career looked like it was ready to take off until things unraveled. He hadn’t even reached his prime yet by the time he was dealing with injury after injury.

So, what might have happened if his body hadn’t broken down? A few things really.

For one, he would have lived up to his insane contract. In the four seasons he was healthy, DiPietro was winning between 25-30 games a year. He was only continuing to take his game to another level with each passing year.

The Islanders don’t end up rebuilding. Once DiPietro began to fall apart, so did the franchise. They went through a painful five years which were some of the lowest for the organization. And even when they finally got back to being respectable, DiPietro was basically a shell of himself and the team no longer needed his services. Oh, and the team also never gets the chance to draft John Tavares.

The franchise doesn’t go through a goalie carousel for years. Even now with Ilya Sorokin making his way to Long Island hopefully soon, the Isles’ search for a true number one goaltender has been long and arduous. You can’t even count on one hand how many goalies they’ve had since DiPietro without getting angry. DiPietro staying in one piece would have meant security for the organization at the most important position.

Garth Snow builds a Cup contender around DiPietro.Â With a number one goalie locked in, Snow would have been able to put his major focus on putting the pieces around him which lead to winning consistently.

DiPietro ends up becoming one of the top goalies of his generation. When you post back-to-back 30 win seasons, there’s something special. DiPietro’s play would have garnered league-wide recognition, and his battles with Henrik Lundqvist, Carey Price, Marc-Andre Fleury would have been legendary.

He becomes a legendary figure for the team and has his number 39 retired. Cup winner or not, DiPietro would have become the second coming of Billy Smith for the Isles. His exceptional numbers and the impact on the franchise would have earned him his spot up in the rafters of Nassau Coliseum and the new Belmont Arena.

We will never know what Rick DiPietro could have become before his career took a turn sideways. It’s one of those conversation Islander fans still wrestle with nearly seven years since he last played.

And it’s something they’ll continue to ponder because there was an opportunity for him to be something special.