New York Islanders: Should the Islanders draft a goalie? 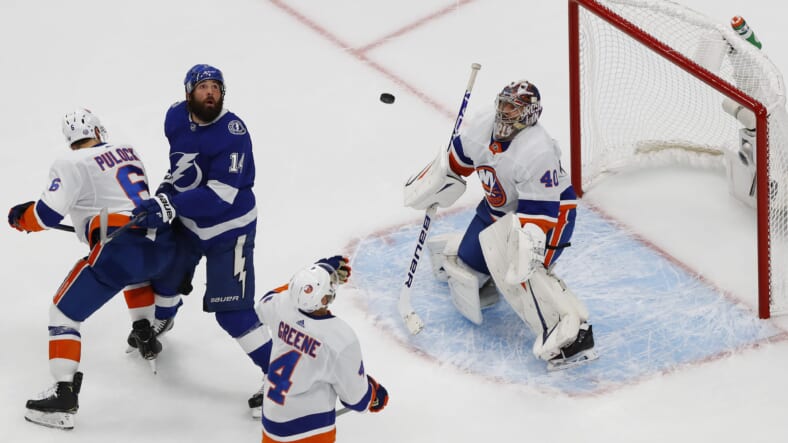 The New York Islanders finally have a pick today in the 2020 NHL Entry Draft. The problem is, this pick is late in the 3rd round. You’re not going to draft someone who’s ready to play immediately in the 3rd round.

So, if you have to develop this player for multiple years, why wouldn’t you pick a position of future need. I mean the Islanders didn’t qualify Linus Soderstrom, and Christopher Gibson/Jared Coreau aren’t getting any younger. With the 90th pick in the 2020 NHL Entry Draft, I have the Islanders selecting a goalie.

Who are the candidates though?

Commesso hopefully drops down this far. In 27 games, Commesso recorded a 2.05 GAA, and .920 save percentage. Commesso is only 6 foot 2, but he takes up most of the net. Cuts down the upper angles really well, and is very aggressive.

Commessi also has some very strong legs, his kick saves are one of the best in the draft this year. His transition to the butterfly is quick and effective. His puck control is very good, and he’s calm under pressure. Commesso is never bothered by a bad goal. His rebound control is the only thing that goes against him. Could be a legit #1 one day if he keeps developing.

Joel Blomqvist consistently blows me away. Blomqvist showed a ton of promise in the Finnish league, as he sported a .930 save percentage for the last two years. Blomqvist is more of a hybrid goalie, switches between stand up and the butterfly. He doesn’t give many shots up high.

Blomqvist has some excellent puck control, especially for a young goalie. He doesn’t get beaten by dekes too easily. Blomqvist has some very strong legs as well, rivaling Semyon Varlamov. By far my favorite goalie that could possibly fall to #90. Whoever drafts Blomqvist is getting a great goalie.