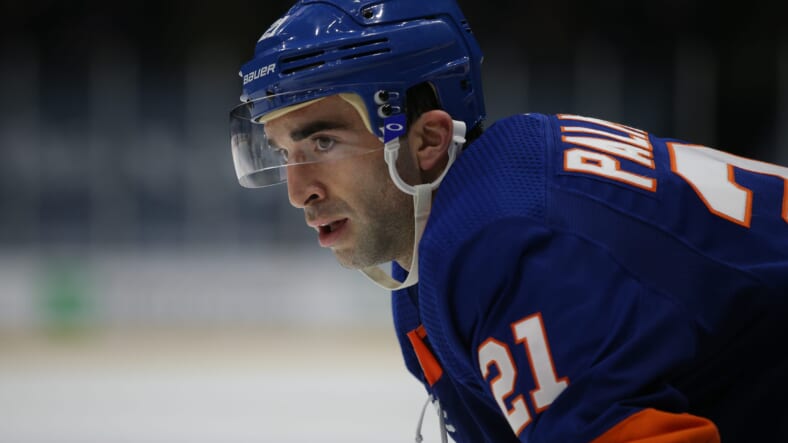 The New York Islanders clinched a playoff spot with their dominant win over the New York Rangers on Saturday. Off of the hangover, the Islanders blew a 2 goal lead to the worst team in the league. I will not blame individual players, but something has to be done about Kyle Palmieri and Travis Zajac. Both of these newly acquired players are not living up to their playing abilities at all. Travis Zajac has become a 13th forward, as he lost his starting spot to Leo Komarov. While Kyle Palmieri is on a total dry streak and looks totally out of place most of the game. What is the solution to finally get these players rolling before the playoffs come along.

I still don’t understand how Leo Komarov/Travis Zajac,/Josh Bailey all got first-line minutes before Kyle Palmieri. Head coach Barry Trotz loves running the first line with a true power forward and 2 elusive playmakers. Kyle Palmieri is literally the definition of a power forward, so it makes no sense why the Islanders won’t at least try the combination. Mat Barzal’s play-making abilities, mixed with Jordan Eberle’s good Hockey sense, could definitely catapult Palmieri’s production. Islander fans saw Anthony Beauvillier revive his season when Trotz brought back the second line from last year’s playoffs. I don’t see why Palmieri being on the first line won’t do the same.

Travis Zajac was brought to the Island just in case another forward went down. JG Pageau took last night’s game off due to injury, and Zajac was brought in to clean up the third line. Zajac played as bad as Ross Johnston does. If Zajac played at least decent last night, I bet he would’ve taken Komarov’s spot, who took 2 penalties. Zajac high-sticked a Sabres’ player when the net was empty, on purpose. Never won a single 1v1 battle. It totally stunted the momentum of the third line. To sum it up, Zajac can either pick it up when he gets another chance, or he can find his way into free agency quickly.