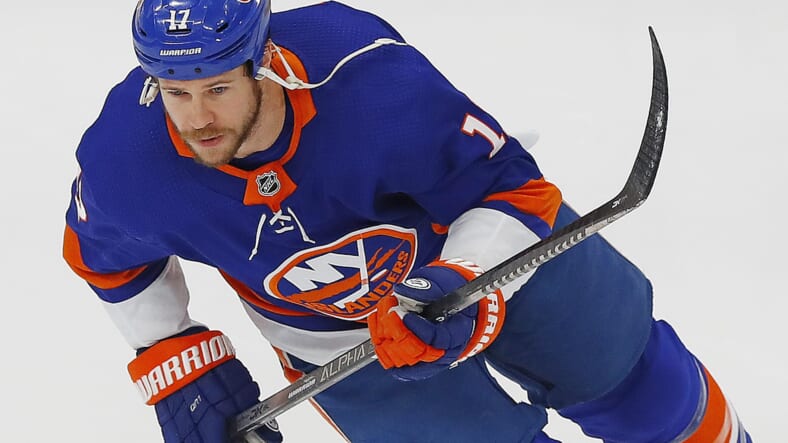 New York Islanders‘ long term enforcer, Matt Martin, is closing in on a contract to return to the Island. Martin is almost like the modern-day Mr. Islander. Every Islander fan loves him and wanted him to re-sign.

Lou Lamoriello is finally getting the deal done. Arthur Staple, longtime Islanders’ reporter, states that as many as 7 teams inquired on Martin last week. There have been reports that Martin took a hometown discount in order to return to the Island. I’ve projected his contract length and cap hit down below.

This will not be a one year deal. It won’t be a one year deal because Ross Johnston won’t ever take his place. Isles fans have to be happy about this, though. Martin was one of the best players on the Islanders during the playoffs.

Martin is also lightyears better than Johnston. Yes, Johnston can hit pretty hard and fight everyone. Martin can actually forecheck effectively, score key goals, move the puck around, and still be a top enforcer in the league. This deal must be at least 2 years long. I wouldn’t be surprised if the deal is for 3 years. He’s a key piece on the Isles, and that needs to be recognized.

As previously stated, Martin most likely took a hometown discount. This means he isn’t getting paid $3 million a year like his linemates. That doesn’t bother him though, he’d rather play on the Island than anywhere else. He’d take $700k from the Islanders before he takes $5 million from the Rangers. That’s loyalty in it’s purest form, and that’s why the fans love Martin.

No one wanted him to leave the first time, and no one wants to see him leave again. I believe Martin signed for $1.5 million a year. It’s a discount for him, but it gets the Islanders back a key piece in their lineup.