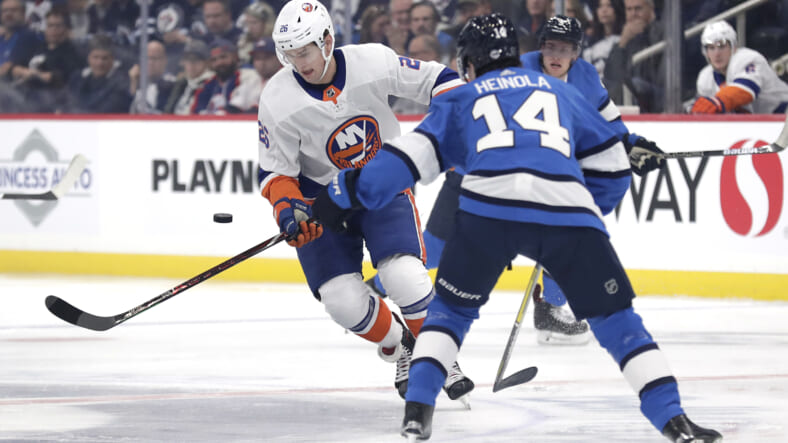 The New York Islanders have only played 3 games this season but have the same problem as last season. They can’t seem to figure out how to put the puck in the back of the net consistently. I know the Isles scored 4 goals against the Rangers in the first game. But, in the last 120 minutes of gameplay, they’ve only scored 1 goal.

The Islanders aren’t going to go make a trade for a top goal scorer. So, this player must come from inside the system. The answer is obviously Oliver Wahlstrom. No other winger has goal-scoring abilities as Wahlstrom has. Where would he fit in the lineup, though? Also, how would this impact the current gameplan?

Ross Johnston’s best ability is his physicality, and this is a known fact. But he only has 11 hits in 3 games this season. The fourth line has been doing their thing and together have 27 hits in 3 games.

Even Kieffer Bellows has 10 hits in 3 games. It’s not like the Islanders need more checking. They need more goal scoring. And I also believe the reason why the third line gets a lack of minutes compared to the other lines is the fact that Ross Johnston is on it. I’m not calling him completely useless. But, as a wise man once said, “Johnston can do nothing just as much as he can do something.”

The Positives of the Change

When good players get the puck in space, there’s a scoring chance to be had. And when the puck gets on the net, good things happen. The third line takes the fewest amount of shots on net, with just 5 all year.

The puck needs to get on the net, and with a crafty player like Wahlstrom, it most certainly will. Teams don’t know how to gameplan for Wahlstrom. But, they know how to stop Johnston and make him slip up. All the Isles need is a confidence boost. If the Islanders can get Bellows and Wahlstrom to feel comfortable, the third line can be one of the deadliest in the league.