New York Islanders: Is Alex Killorn in Play for the Isles? 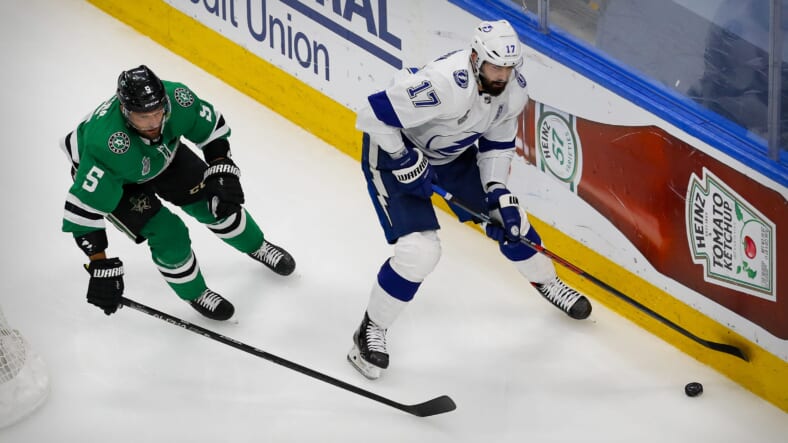 The New York Islanders need a top 6 winger, and that’s no secret to anyone. This top 6 winger must be a goal scorer, but at the same time, he needs to know how to play defense. That’s why I’m very skeptical of Patrik Laine and Taylor Hall. Neither of those guys is huge on defense, and they need to be if they want to get those big minutes in Barry Trotz’s system. Enter Alex Killorn. Alex Killorn does it all, he’s a goal scorer, he plays on the PP and PK, he’s a grinder who can lay the boom. Â Killorn has the word Islander written all over his play. But, is he in play for the Islanders?

Alex Killorn does have a no-trade clause in his contract, but it has become a 16 team no-trade list as of this year. If you’re the Islanders, you’re praying that you don’t get put on that list. Killorn could waive this, though. I mean, you recently saw Patrick Hornqvist waive his NTC after realizing the Penguins didn’t want him. I wouldn’t be surprised if Killorn ends up feeling the same way. Killorn’s team just won the Stanley Cup, it’s not like Tampa owes him anything or vice versa.

Alex Killorn signed a 7-year deal in 2016, he’s now making $4.5 million per year. The Islanders do not have a ton of cap, but they can make some moves to open up space. First, the Islanders have to find a way to ship off Johnny Boychuk and Andrew Ladd. If the Isles can do that and sign all their RFA’s, it’s a no brainer to trade for Killorn. Killorn doesn’t have a large contract, but it’s not one the Isles can take straight on.

Since I get berated in the comments every time I report a possible trade offer, I’m going to throw out multiple ideas. NTC for NTC? Jordan Eberle and Ross Johnston for Alex Killorn. As long as the Islanders keep Matt Martin, I don’t know which Islander fan that says no to that. Killorn is more than a million dollars cheaper and scores more points. Tampa gets a more expensive winger, but they also get a good enforcer. Or what about Nick Leddy, Kyle Burroughs’ rights, and a 6th round pick this year. Tampa gets another offensive defenseman and a 7th defensive defenseman. The Islanders get the guy they “want.”

Also, just for anyone, whose going to comment. The Islanders do not care about the boarding in game 2, it’s in the past, I doubt they hold grudges like that.