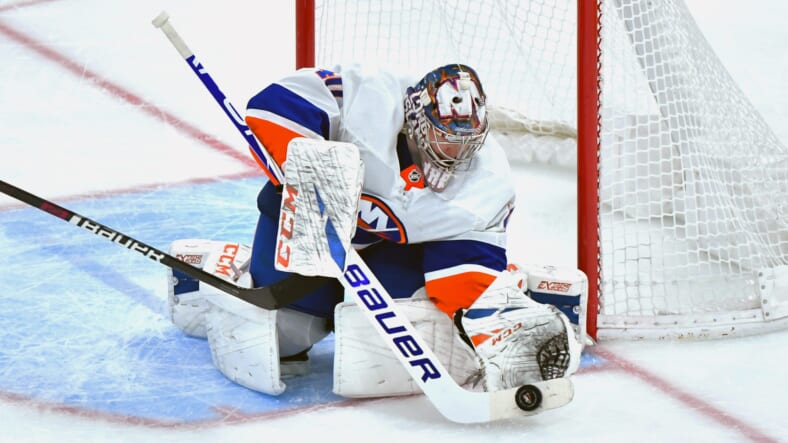 The New York Islanders signed goalie Semyon Varlamov to a 4-year deal in free agency last year. Varlamov proved to everyone that his 2013-14 Vezina Trophy finalist season wasn’t a fluke. Varlamov recorded 19 wins, a .914 save percentage, and a 2.62 GAA in 39 games started.

In the playoffs, Varlamov would continue to shine with the Islanders as he single-handily won them a couple of games. Former Islanders’ goalie Thomas Greiss obviously held down a couple of wins too. Greiss relieved a lot of pressure off of Varlamov all season long. But, Thomas Greiss is in Detroit now, and rookie Ilya Sorokin takes the backup slot. There are some big expectations for the Islanders’ star goalie going into the 2020-2021 season.

The Islanders are not a team that can put up four goals every night and wins just off of firepower alone. They win off of their defensive schemes and good goalie play. If the Islanders want to make another deep playoff run, Semyon Varlamov must take another leap.

Varlamov might be 32 years old, but maybe you can still teach an old dog new tricks. I believe the stats Varlamov needs for him to be considered a top 10 goalie reads as follows. He needs under a 2.55 GAA, with a .917 save percentage. I assume he will play over half the 56 games during this season as well. If he plays 31/56 games with those aforementioned stats, he will be a top 10 goalie.

How would one even measure if Varlamov’s teachings affect Sorokin’s’ playing abilities? “That’s another dumb point, all you make is dumb points.” Marc-Andre Fleury mentored Matt Murray, and the Penguins won 2 Stanley Cups in 3 years because of that.

Ben Bishop mentored Andrei Vasilevski, and Vasilevski has been a top 3 goalie for the past 5 years. Braden Holtby mentored Ilya Samsonov, and now Samsonov is one of the top young goalies in the league. If Semyon Varlamov can mentor Ilya Sorokin in the same ways that these guys did for their backups, the Islanders will win a Stanley Cup soon. There is no doubt in my mind about this at all. I expect Varlamov to do this successfully.