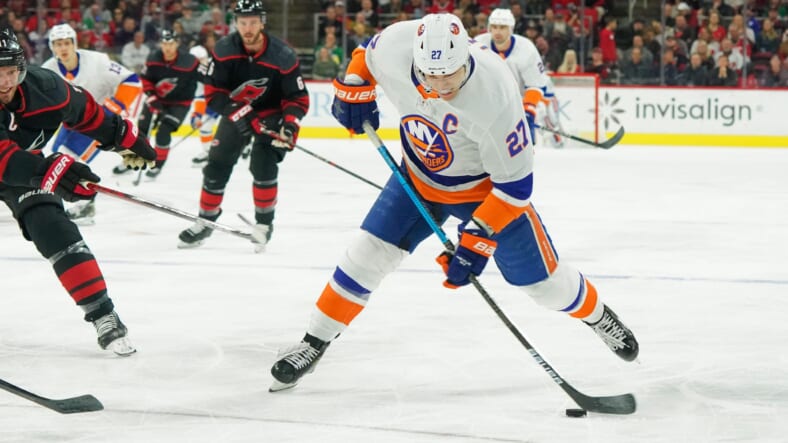 The New York Islanders have a big decision to make when the Seattle Kraken joins the league. The rules must be followed as such. Each team has the choice to either protect 7 forward, 3 defensemen, and 1 goalie. Or, they can protect 8 total skaters and 1 goalie. It makes sense for the Islanders to follow the first option, as they have more talented skaters up and down the roster. The Islanders also have an exempt list full of young players who they don’t have to protect because they can’t be chosen. This list contains players like Oliver Wahlstrom, Ilya Sorokin, Noah Dobson, Anatoly Golyshev, Bode Wilde, and Samuel Bolduc. There are obviously more players on that list, but those are the key ones. Who will the Islanders protect?

The Islanders can only protect 7 forward, and most of their choices are pretty obvious. Anders Lee, Mat Barzal, JG Pageau, Brock Nelson, Jordan Eberle, and Anthony Beauvillier. This leaves one spot left with a bunch of forwards vying for that spot. I don’t believe the Kraken would take Casey Cizikas just because his contract is expiring this year. This leaves Josh Bailey, Matt Martin, Cal Clutterbuck, Leo Komarov, Michael Dal Colle, and Kieffer Bellows left. The Kraken aren’t going to take Clutterbuck, Martin, Komarov, or Dal Colle. If you’re looking at the most valuable, it’s a decision between Bellows and Bailey. Honestly, I’d leave Bailey unprotected; he hasn’t really ever met that potential that he had when he was drafted. It’s possible he doesn’t get picked because of his large contract.

This decision is pretty easy due to the fact that Noah Dobson doesn’t have to be protected. Ryan Pulock and Adam Pelech are going to be protected, not that shocked anyone. Scott Mayfield, Nick Leddy, Andy Greene, Thomas Hickey, Parker Wotherspoon, and Sebastian Aho are left. Based on age and value, Andy Greene and Thomas Hickey are not getting picked at all. Parker Wotherspoon and Sebastian Aho are unproven, so they’re out of the question. Nick Leddy 100% gets protected over Scott Mayfield based on production.

It’s not even a question of who the Islanders are going to protect. It’s between their franchise goalie Semyon Varlamov and their third-string goalie Cory Schneider. At the end of the day, Cory Schneider is not getting protected, but he most likely won’t get picked.