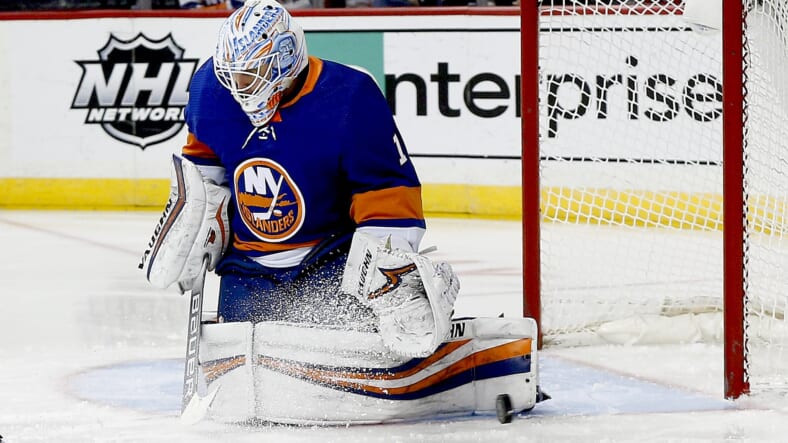 As New York Islanders‘ head coach Barry Trotz said, “that was the worst game that we’ve played to this point in the playoffs.” I don’t think the Islanders played terrible last night, but they weren’t good. Nevertheless, the Islanders take a 3-1 series lead. And for the first time in 27 years, the Islanders could be headed to the Eastern Conference Finals. The Islanders are clicking right now, and it’s a scary sight for all other teams. There were three key players to last night’s win, and they deserve to be recognized for their efforts.

This was possibly Thomas Greiss’ last game as an Islander. Greiss gave it his all, as he made 36 saves on 38 shots. Greiss made some of the hardest saves look insanely easy. The Islanders are unbeatable when their goalies are clicking. Greiss didn’t make any mistakes last night. As Thomas Greiss said, “it’s not rocket science out there, just stop the puck.” Greiss gets the first star of the night for sure. If this is his last game, thank you, Greisser, for everything.

Who knew it could be Brocktober in Paugaust? Brock Nelson finally broke his cold streak and put up two goals last night. This is only the beginning of his hot streak; once Brock gets on a roll, he’s impossible to stop. Nelson possesses the best shot on the team by far. When he’s in front of the net with no one around him, you can bet on Nelson burying it top corner. The Islanders are dangerous even when Nelson wasn’t clicking; what’s going to happen to the league when he clicks?

I’ve said it once, I will say it again; Scott Mayfield won the Islanders the game last night. Mayfield basically said, “okay, I’ve had it, this game is going to be over because I want it to be, I’m tying the puck up, outmuscle me.” And no one was able to outmuscle Mayfield at all. For the last 18 seconds, Mayfield kept the puck on the boards. Mayfield has a purpose, and he fulfilled it. Mayfield also got on the scorer’s sheet last night with an assist.

Josh Bailey has to be mentioned as one of the top players. Bailey is now point per game in the playoffs. He is also tied for 4th in the NHL in assists during the playoffs. Bailey is the anchor of the B-B-B line and creates offense for everyone around him. Bailey has been criticized for too long; hopefully, now the criticisms will stop. JG Pageau deserves a mention as well because he’s the do it all guy. Lou Lamoriello should get a parade through the streets of Long Island for that trade. Pageau is tied for 3rd in playoff goals this season. How many playoff goals does that late first-round pick have again?

The Islanders are one win away from the Eastern Conference Finals. Soak it in Isles fans, the day you’ve dreamt about is almost here. Nine more wins and you’re lifting the Stanley Cup. The Islanders play the Flyers on Tuesday at 7 pm ET.