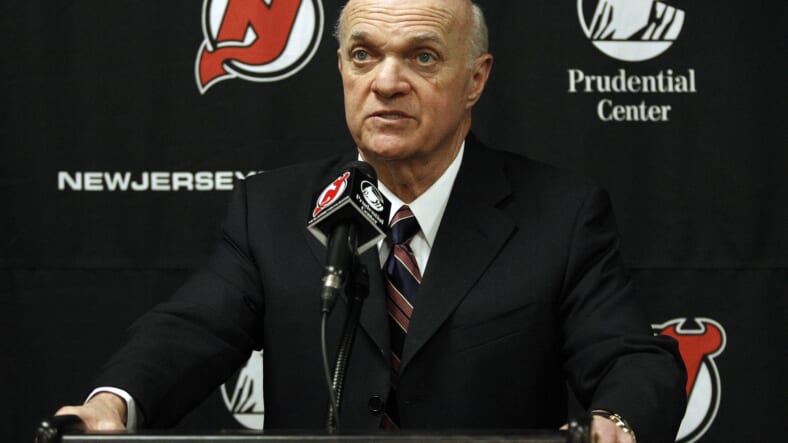 Jan 8, 2010; Newark, NJ, USA; New Jersey Devils CEO, president, and general manager Lou Lamoriello speaks at a press conference following the game against the Tampa Bay Lightning at the Prudential Center. The game was postponed with 9:12 left in the 2nd due to a lighting problem with the Lightning leading 3-0. Mandatory Credit: Ed Mulholland-USA TODAY Sports

Lou Lamoriello believes in his team, and today, he made it clearly known by making the biggest move in his tenure as general manager of the New York Islanders thus far, as well as the Islesâ€™ biggest trade deadline acquisition in nearly 13 years.

This morning, Lamoriello swung a deal for Ottawaâ€™s Jean-Gabriel Pageau for a 2020 conditional first-round pick, 2020 second-round pick, and a 2022 conditional third-round pick. He then signed the 27-year-old to a long-term deal for the next six years at $5 million AAV.

“First of all, we felt that with our lineup, to solidify down the middle we needed a center iceman,â€ Lamoriello said in a conference call with reporters just after the 3 P.M. deadline had passed. In particular a right shot.â€

The addition of Pageau immediately makes an Islander club, who has been struggling to find the right recipe for their third-line center since Valtteri Filppula left in free agency and since Casey Cizikas went down. Theyâ€™re now deep down the middle for the foreseeable future with he, Mathew Barzal, Brock Nelson and Cizikas.

What the trade also does is add some juice to a forward corps who have been in desperate need of a spark in recent weeks.

â€œWhen youâ€™re looking at a center you try to get a complete player who can play in all situations and certainly this young man fit the bill. He has signed an extension and weâ€™re delighted with that, especially with the age heâ€™s at and what we feel he can bring,â€ Lamoriello added.

Lamoriello wasnâ€™t done there, as it looked like he was also gunning to snag another big-time name, Zach Parise.

Parise and Lamoriello go way back to when Parise was drafted by Lamoriello when he was the general manager in New Jersey. The deal couldnâ€™t come to fruition, and although Lamoriello wouldnâ€™t confirm or deny that there was some smoke to the fire, it once again showed he was taking initiative to keep improving this core group.

I had written on Friday that the pressure was on Lamoriello to do something major, even after he traded for veteran d-man Andy Greene last Sunday. Trading for Pageau was exactly that. It sends a message to the fans, players, and the coach that this is a win-now organization thatâ€™s not focusing on the future like years prior.

Making a move like this speaks volumes about Lamoriello and how heâ€™s continuing to keep this franchise moving in the right direction.

Heâ€™s tried at the deadline last year and failed. He failed in the offseason with Artemi Panarin. This time around, he didnâ€™t. He connected and it was a home run.

Lamoriello in one instance again changed the narrative that this franchise has a bright future ahead of it. And yes, it might be not be until down the road when we know just how important this day was. But at this moment, Lamoriello got the job done and swung for the fences to do it.